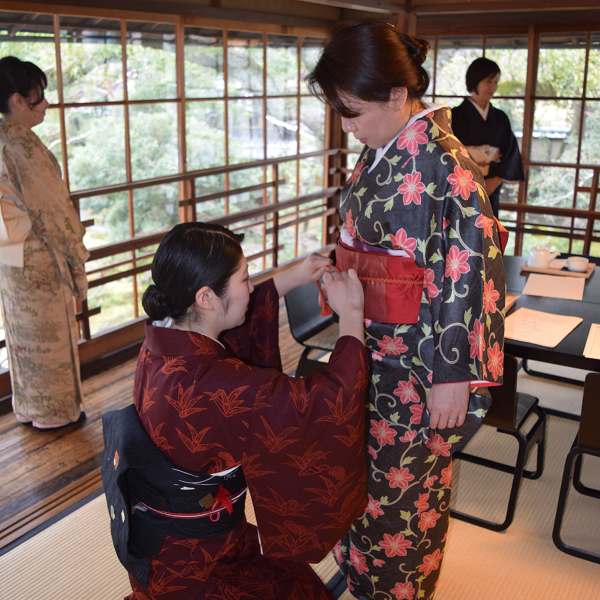 On the afternoon of February 5 (Wed.), we held a kimono wearing class on the second floor of Murin-an’s main house. At today’s kimono wearing session, we also had some participants who came for a trial lesson who learned how to wrap a sarashi (bleached muslin fabric) around the kimono. After putting on kimonos, we learned about the etiquette of deciding what to wear according to the occasion, one of the basic principles of dressing properly. 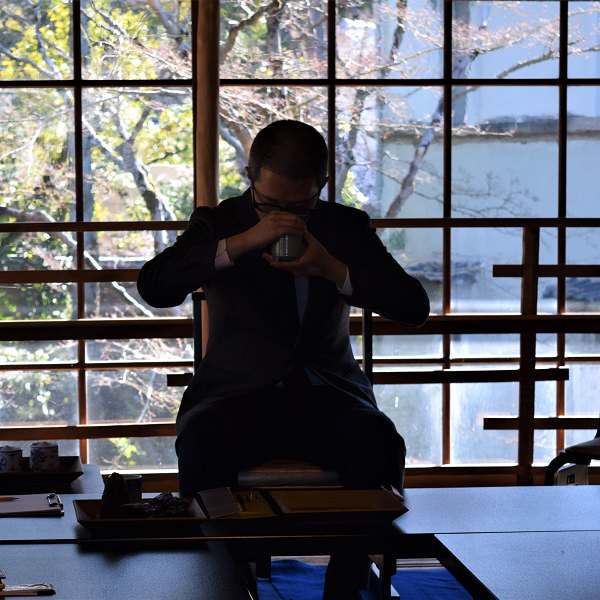 Murin-an and Shoyeido, “Salon in the Garden: Incense”

On the afternoon of February 11 (Tues.), Murin-an held “Salon in the Garden: Incense” with the cooperation of Shoyeido Incense Co.
In Japanese, to smell incense originally meant “to act on” it, and to act upon incense meant focusing your nerves on it. At this salon, however, questions and conversations, and sometimes even laughter criss-crossed each other as people encountering incense for the first time enjoyed themselves. While you could probably say the same thing for Murin-an’s garden, each person has their own way of experiencing incense. Even a smell simply described as “sweet,” is expressed as “erotic,” “juice coming out of fruit,” “powder makeup,” and many other ways. We hope everyone will try looking for the incense that is the one for them. 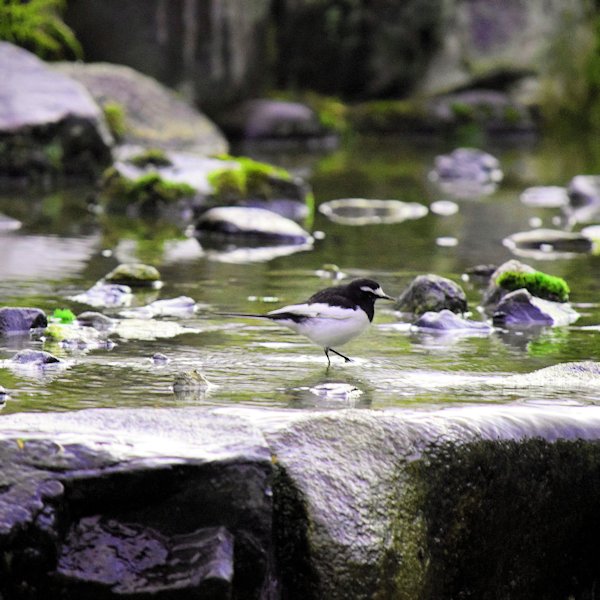 The Chirping of the Japanese Wagtail

Amid the fierce cold, there was a Japanese Wagtail walking around Murin-an’s shallows and looking for food. Even when the garden was covered by snow, this bird walked around energetically and chirped a chirp sometimes heard during the breeding season. The look of this bird letting out large chirps and searching for food as it endured the cold gave us the feeling of what it’s like to survive the severity of nature. 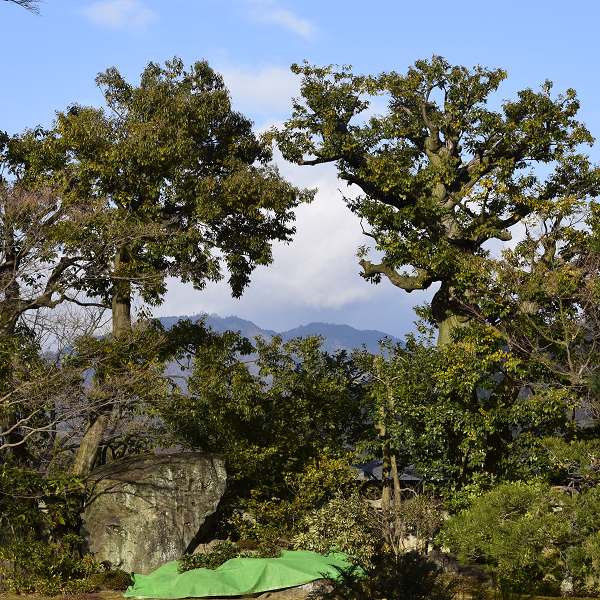 We pruned the chinquapin in the area of the garden that has a view of Mt. Hiei. Here are some pictures of our gardener removing branches while making sure to maintain a balance with Murin-an’s row of border trees. “It’s an old tree now and its hollows have begun standing out,” he said, as he returned to his pruning work. The area of Murin-an with a view of Mt. Hiei is right around the crouching basin arrangement (tsukubai) on the tea room’s east side. On a clear day, you can enjoy the Mt. Hiei landscape from here. 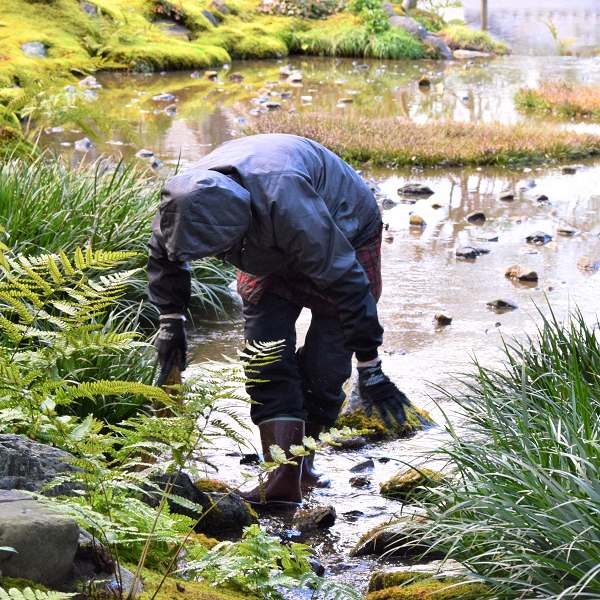 Even during winter, the grass on the Japanese sweetflag at the foot of Murin-an’s three-stage waterfall stays a lush green. We maintain this green scenery by periodically thinning away dead leaves or old and yellow leaves for the sake of the next generation. “Even with just a little care, you can pull out lots of yellow leaves and stems,” said our gardener, as his winnowing basket (temi) quicklly filled up with dead leaves. 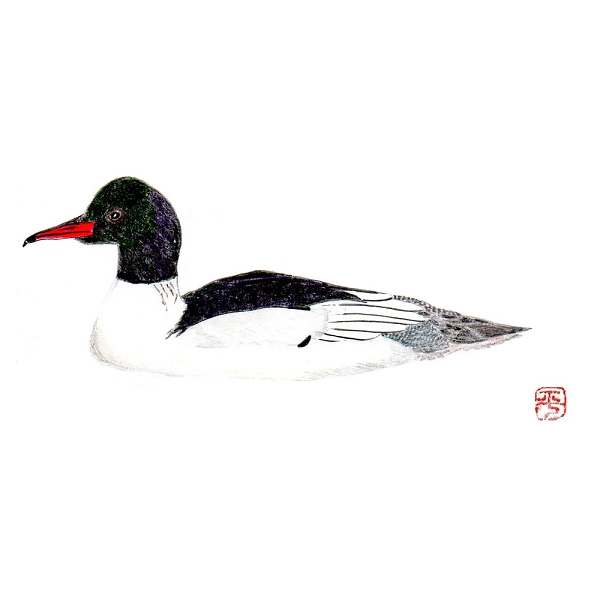 On the afternoon of February 5 (Wed.), we held a wild bird mini-lecture in Murin-an’s 8-tatami mat space. The theme of this lecture was the Goosander, a bird whose characteristic is its bill, which has serrated edges like that of a saw. We began by discussing how this bird’s Japanese name (kawa-aisa) is an allusion to the fact that it comes to the river just after the end of autumn, and then introduced poems written about the Goosander in the Manyoshu (an 8th century poetry anthology), its ecology, the difference between brood amalgamation and a crèche, and the reason that wild birds lost the serrated edges on their bills. 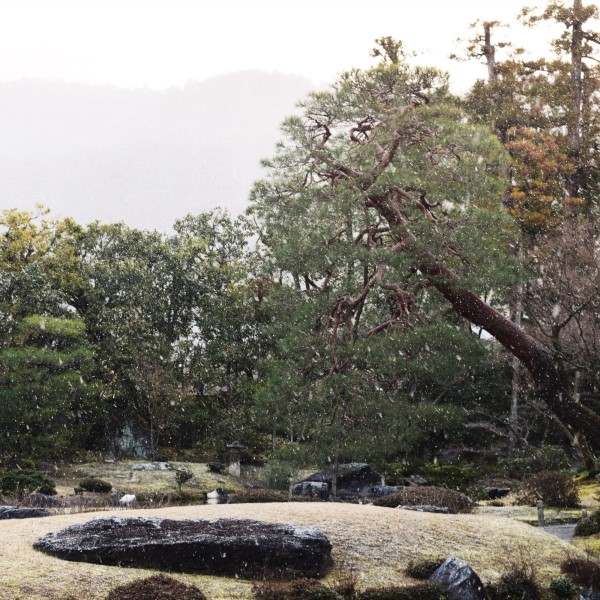 Murin-an’s First Snow of the Year

On February 6 (Thurs.), just before Murin-an opened, the first snow of the year fell inside the garden. A light snowfall fluttered down from the sky, covering moss and grass in a light blanket of snow. 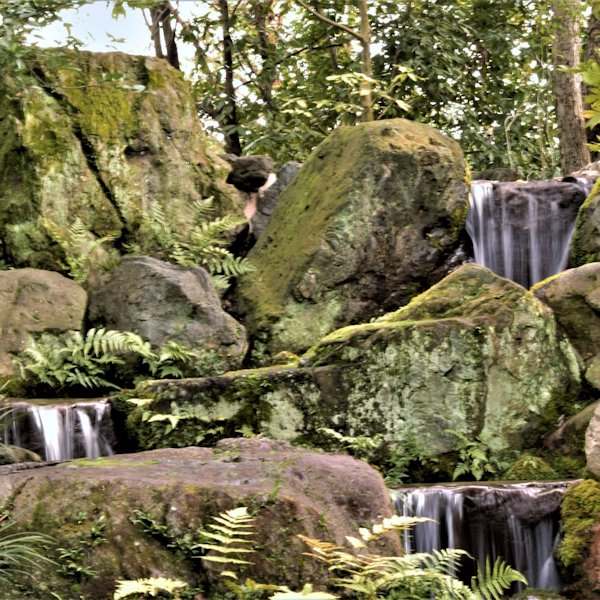 Murin-an Garden’s stream begins with its three-stage waterfall. The waterfall’s crest features both the dynamic sound of the stream and the white look of water falling in a sheet, and the marsh flowing out from this area allows the light rhythmical movement of the water to be enjoyed. Look back toward the main house and you can see a scene that evokes the aura of lush green moss under a spreading sky after the autumn leaves have fallen. 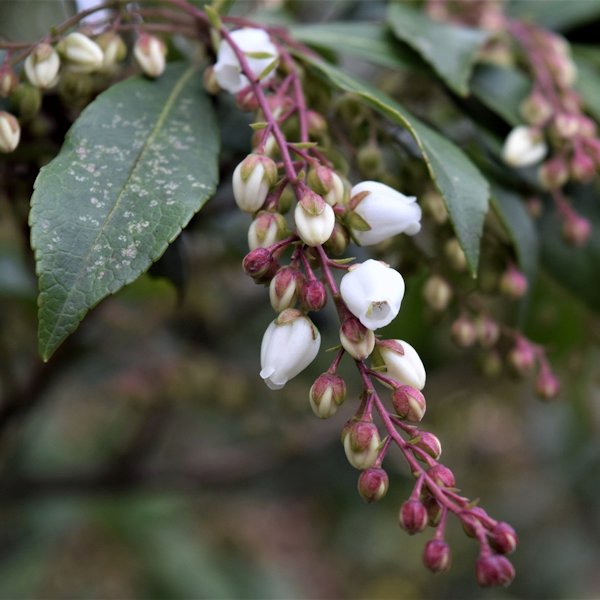 Partly because it has been a little warmer than usual this year, these little white buds have been blooming early, one after another. When so many flowers bloom that they hang downward, then we can enjoy their faintly sweet fragrance along the maple grove’s garden path. 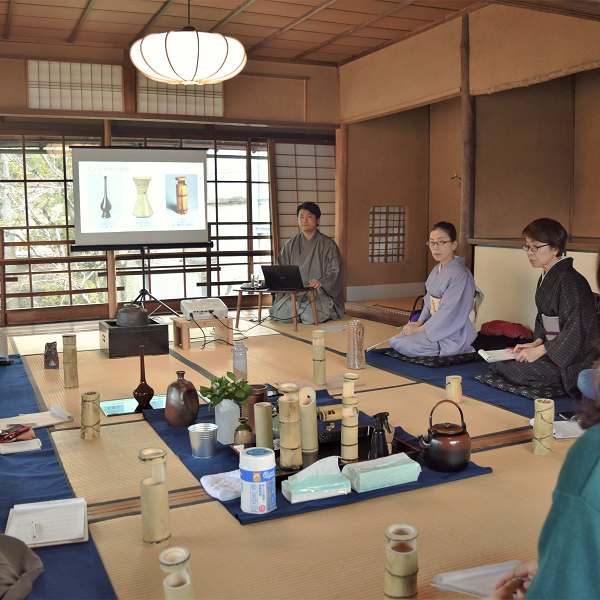 On the afternoon of February 2 (Sun.), we held another lecture in our chanoyu lecture series. This time, our theme was “tea flowers” (chabana). We discussed the history of tea flowers and then had participants arrange tea flowers themselves. Everyone enjoyed arranging the flowers as they learned how to choose them and also about “forbidden flowers” (kinka).