Randomly glance upward in Kyoto during November-December and you will often see gardeners busily plucking needles on top of pine trees. This is the work of removing any old needles still remaining on the pines’ branches. The reason needle plucking is performed intensively at this time of year is that old needles that have turned brown finally stop appearing, so that the work becomes easier. There is, however, a deeper reason behind all the busyness. Needle plucking also means preparing to greet the New Year. It is done to finish up pine tree care by year’s end so as to welcome the New Year in a proper and well-ordered state. Thought of in this way, needle plucking might also be called a ritual for gardener and guests, who welcome the New Year together so that this year they may share the garden once again. 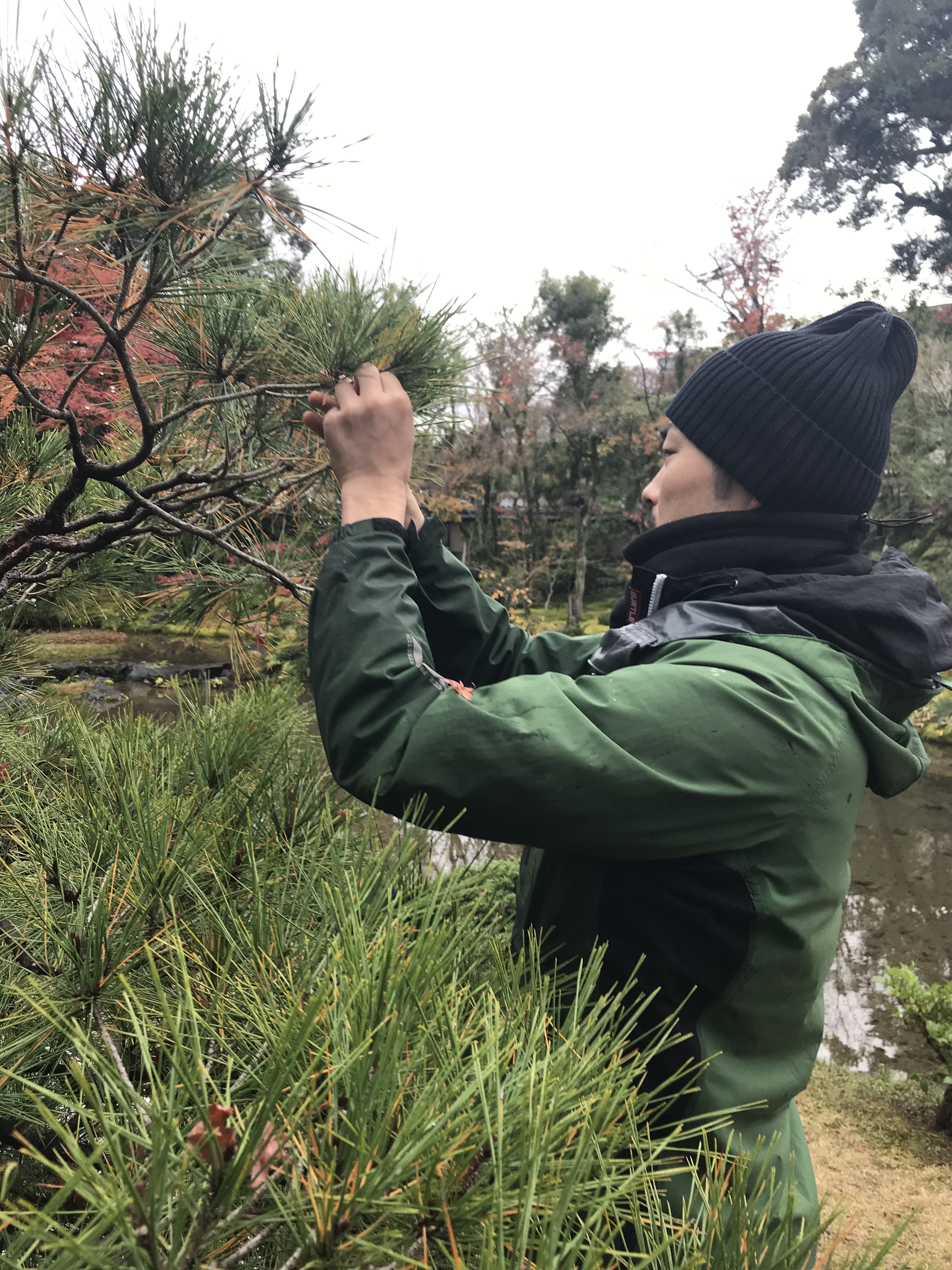 Incidentally, while needle plucking is often performed to prepare for the New Year, it is also sometimes done for the purposes of studying garden management. At Murin-an, needle plucking is also performed for its Fostering Studies seminar program, where participants experience alongside gardeners how gardens are cared for.

Here is what a pine tree looks like before it needles are plucked. It is so overgrown that fallen maple leaves get stuck in its needles and its old brown needles stand out. 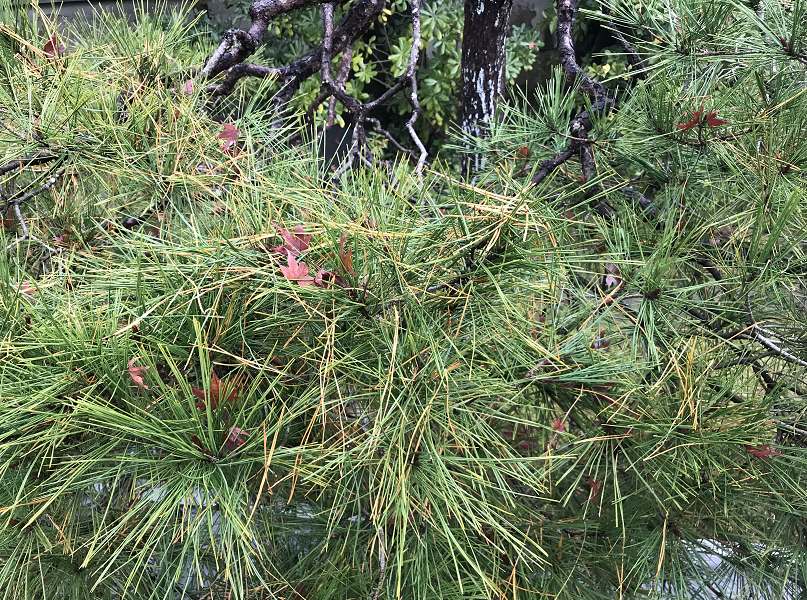 By cutting extended branches and plucking old needles by hand, the pine tree is gradually taken from this state to one with a light feeling of transparency. 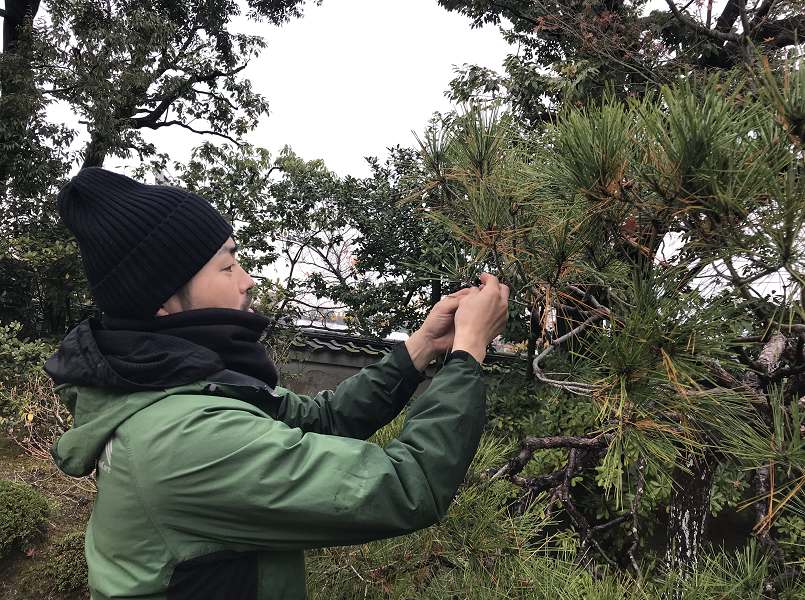 There is no fixed way of plucking needles; methods vary according to locality and region. For example, according to Murin-an’s head gardener Kenta Deguchi, needle plucking at Murin-an follows a style that, even within Kyoto, is unique to Sakyo Ward. “In the Sakyo Ward area,” he says “leaving three branches is considered to be the mainstream. In other words, other areas often leave two branches like this. Three branches, however, comes close to the original natural form of the tree and branch. Leaving two branches divides the energy supplied to the branches in two, but leaving three branches divides the energy into three so that there’s not so much turbulence, or rather, it allows the tree to grow in its natural form.” 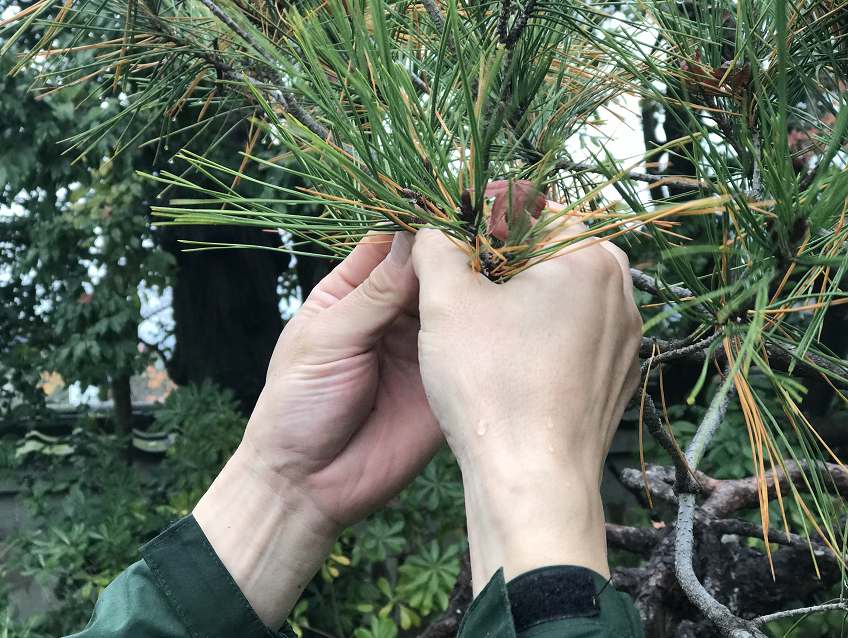 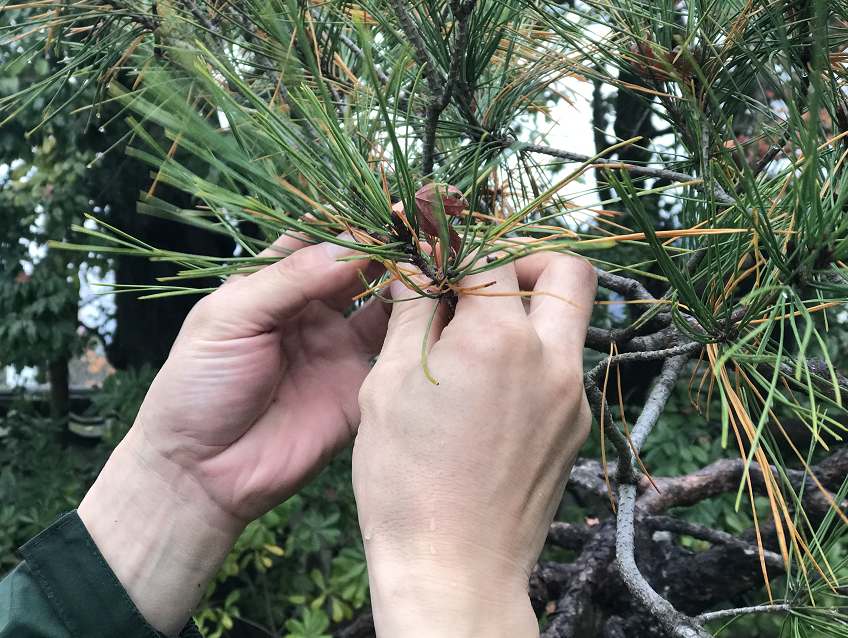 While there are surely other technical differences besides this one, the basic principle behind needle plucking is that it is done with bare hands. This is because finely detailed work is easier to do by using the sensation in one’s fingertips. One could say that it is precisely by grasping these fine needles with your hands that the finished look of needle plucking comes into view. When we consider that this needle plucking is done using one’s bare hands over several days, however, we can see what hard work it is.

A finely detailed finish does not come just from relying on the sensation in one’s fingertips. One must also foster an ability to harmonize one’s work with that of other gardeners, Deguchi says. Taking a branch in hand, he explains how to cut it. “Let’s say we don’t want this branch and so we’re going to cut it. Depending on the person, they might cut it somewhere in the middle. This would feel unnatural and look wrong. If we don’t cut the branch properly at the base, it will be difficult for the wound to heal and it also looks bad. We want people to unify their work at least this much. If they’re going to be working with others, that is.” 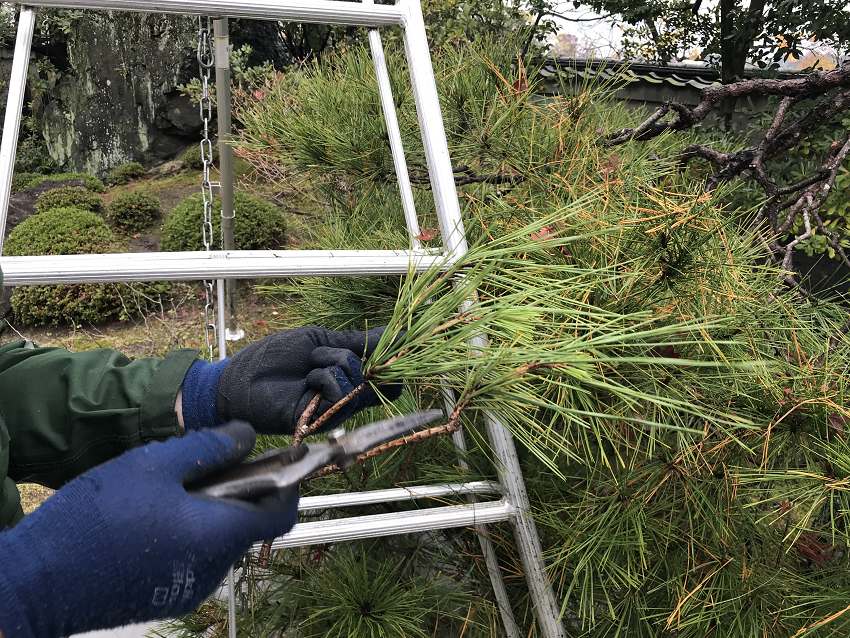 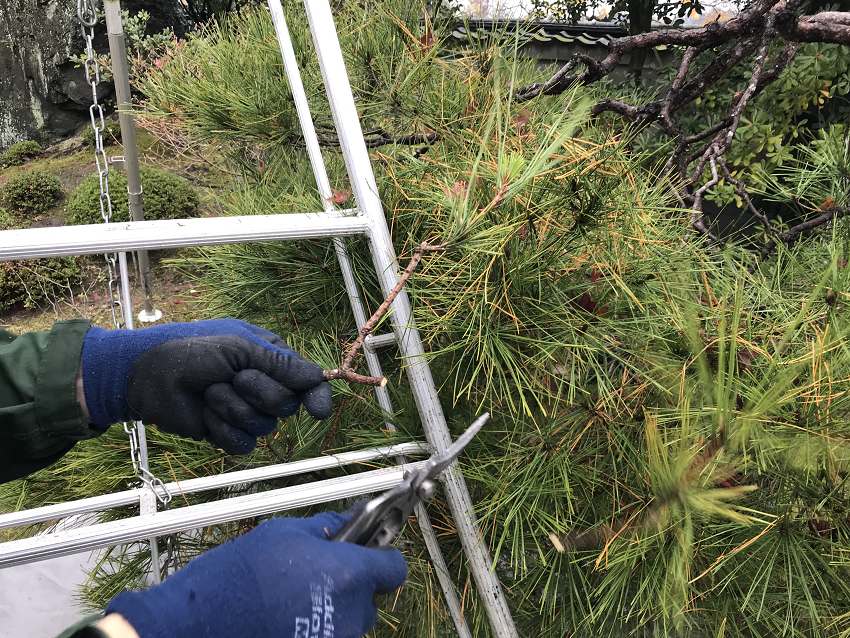 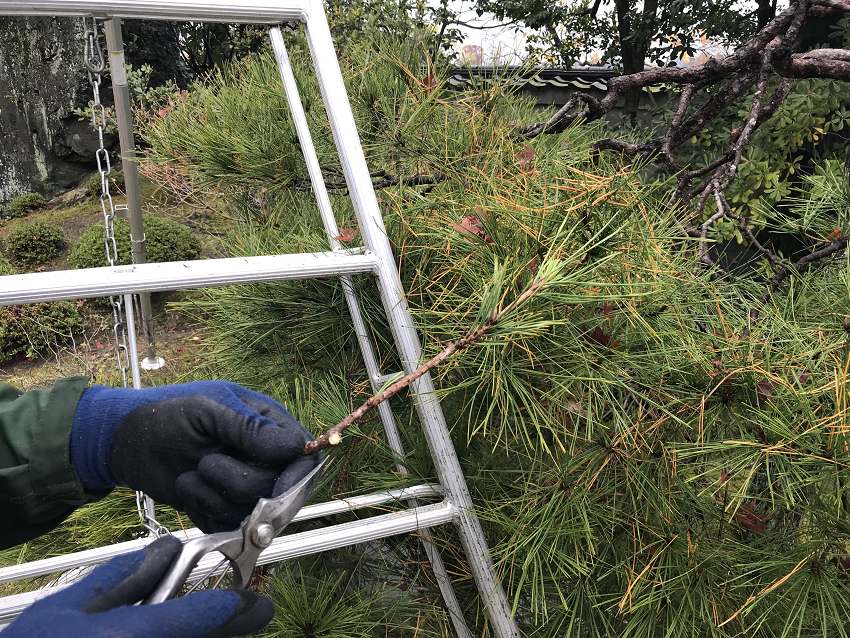 Careful attention is also necessary, he says, to make sure that you do not just do things your own way and that your needle plucking approach matches the thickness or thinness of the finished look. “If you don’t pluck carefully, the needles get damaged and fall down after turning brown like this. Even if things look nice at a glance, you’ll end up having to do it all over again if the work isn’t done right.” In pine needle plucking, where one object of the work is to welcome the garden’s guests, doing one’s best to avoid having to redo work requires teamwork. The issue here is not thoroughness, but rather an ability to “unify” that is indispensable for multiple people to efficiently keep up a consistent impression.

In a word, this nuanced difference might be expressed as “density.” While being interviewed, Deguchi repeatedly referred to “the density of the finished look.” Evidently, it is this density of the needle plucking’s finishing that can most easily be disordered. “When you’re inexperienced, you feel like cutting, so sometimes you cut too much,” Deguchi explains. He means that because this work is done in a context where the whole tree cannot be seen, there is a risk of cutting away too many of its branches. That is why it is essential to stand back occasionally and check with the eyes the work that the fingertips have moved forward. 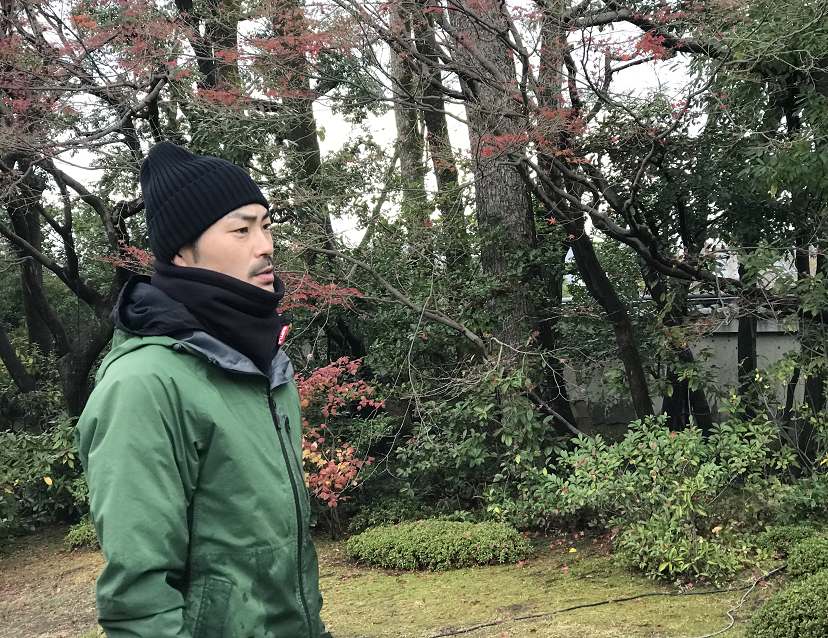 It is a skill that seems truly difficult to acquire, but “it’s fine,” Deguchi says, “because I now remember with my body about how much ought to be enough.” Whether with the fingertips or with the eyes, learning with the body appears to be what is important.

In this way, even while changing posture and the angle of one’s work several times, a unified feeling of density can be preserved. 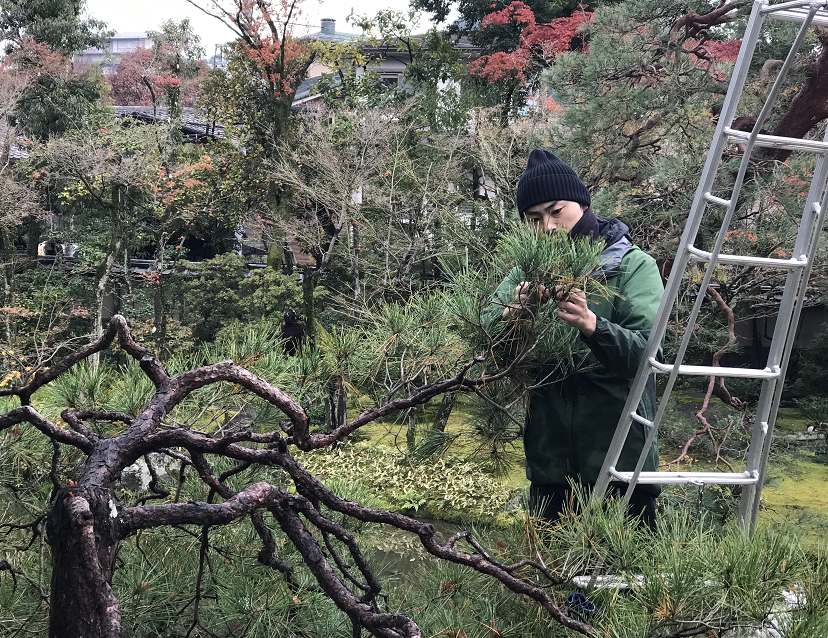 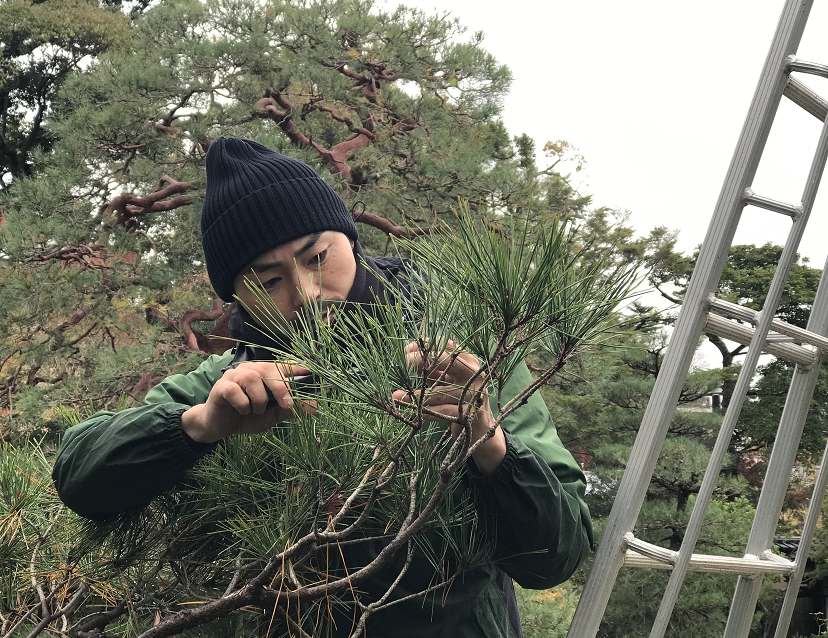 Here is how completely the tree’s appearance changes as a result. 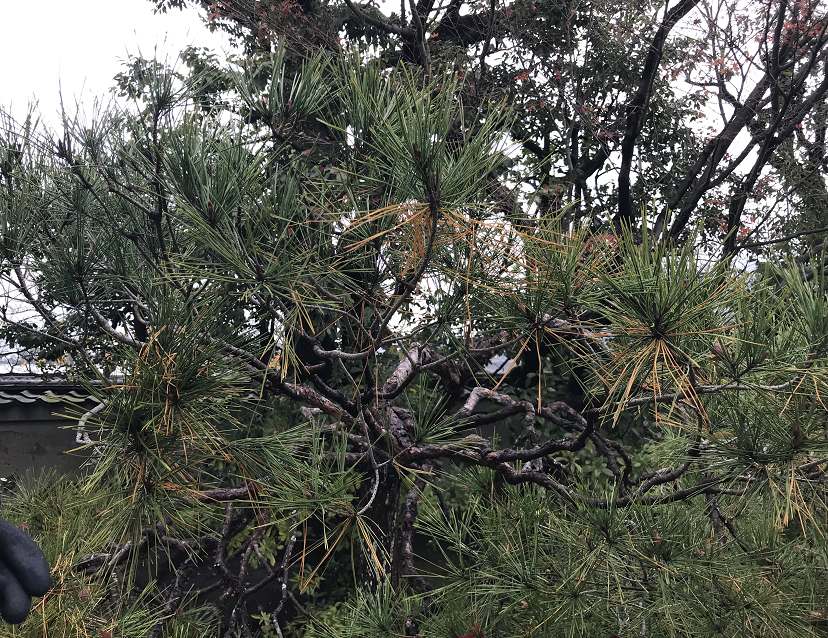 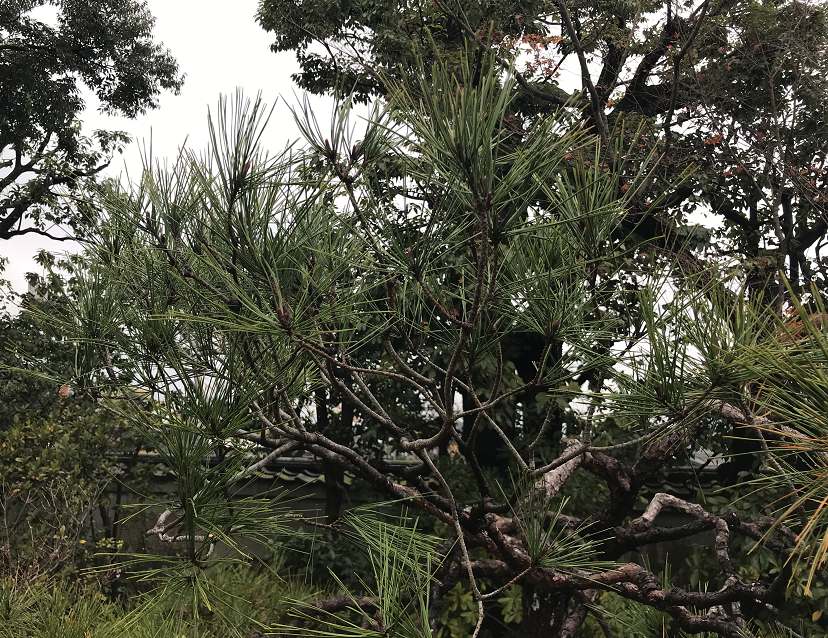 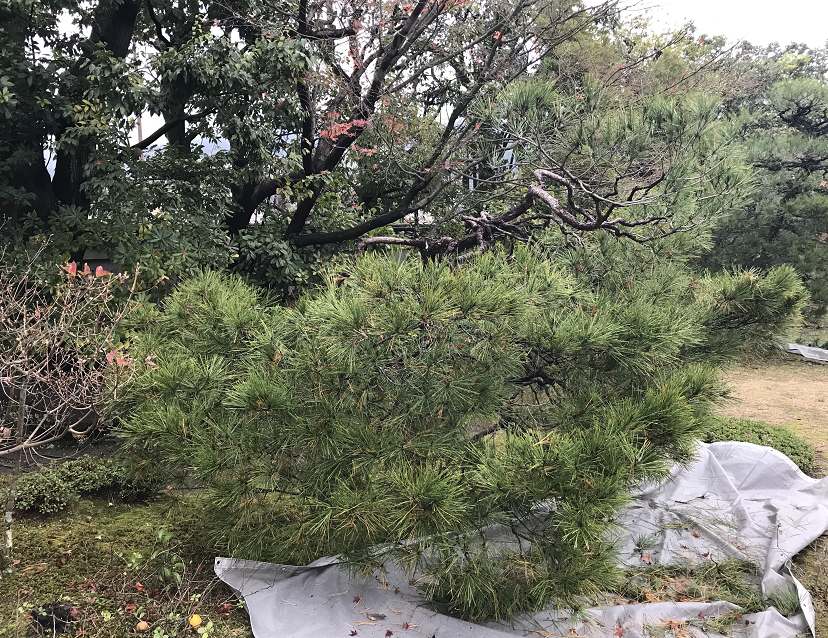 In fact, however, the goal of this day’s needle plucking was not to finish it completely, but rather to prepare a basis for plucking needles together with the participants in Murin-an’s “Learning with the Gardener: Fostering Studies” event.
How, then, did those participants finish up the job!? 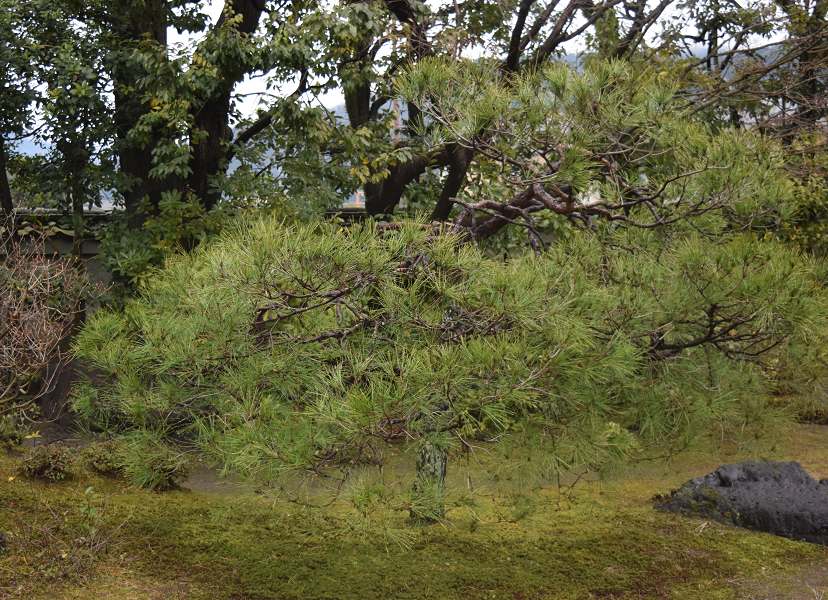 Could we not say that this is a “density of the finished look” that harmonizes perfectly with the surrounding scenery? Looking at this finish, which brings to mind nothing if not a professional’s touch, we can see how the words such as “density” and “unity” that Deguchi used on the date of this interview live not only as gardener techniques, but as ritual acts of sharing the garden with a diverse community.