Murin-an was the garden villa of Yamagata Aritomo, one of Japan’s leading statesmen during the Meiji (1868-1912) and Taisho (1912-26) periods. It was constructed between 1894-96 and is made up of its garden and three buildings: a main house, a Western-style house, and a tearoom. The garden is a modern Japanese garden masterpiece created by master gardener Ogawa Jihei VII based upon Yamagata’s instructions.  Unlike the symbolist gardens that prevailed in Japan until that time that likened ponds to oceans and rocks to islands, Murin-an was built upon a new naturalist view of gardens using the surrounding village mountain landscapes and river streams themselves to produce a dynamic sense of motion. Of the many garden villas in the Nanzen-ji Temple area, it is the only garden to be open to the public all year round. In 1951, it was designated a National Place of Scenic Beauty.

On the second floor of the Western-style house, there is the “Murin-an Conference” room where Yamagata met with fellow statesman Itō Hirobumi to prepare for the Russo-Japanese War. The room’s appearance on that day is still maintained today. 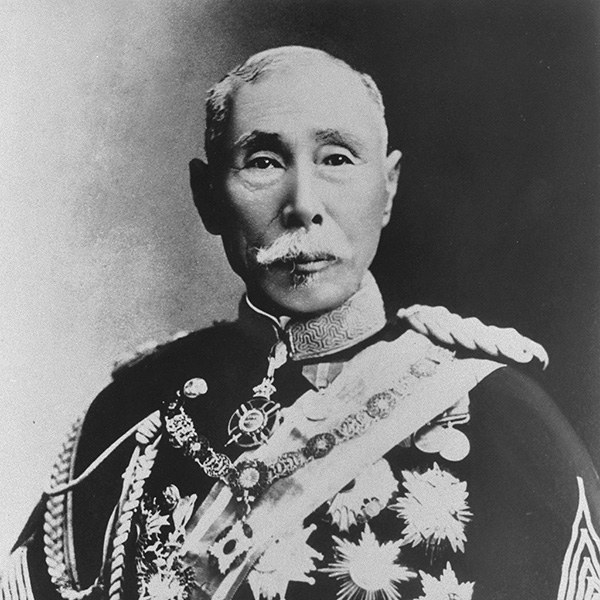 The Gardener and his Client: An Ideal Relationship

“The mountains making up the center of this garden are, I say, the Higashiyama Mountains that soar so lushly before it.”
Murin-an’s owner, Yamagata Aritomo, was in fact also an excellent landscape designer. Standing still in the garden, we come to realize that he had it built around the central point of the Higashiyama Mountains. This was no longer just scenery borrowed from an external landscape seen in earlier Japanese gardens, but a mountainous center point. Ogawa Jihei VII was the person that Yamagata charged with realizing this innovation. Ogawa beautifully incorporated Yamagata’s wishes into the little area of a 3,300m2 garden villa and created a space brimming with narrative themes, from the bright mountain landscape to the waterfall that appears to be deep in the mountains. This was truly the ideal gardener-client relationship. Today, we make systematically planned efforts based upon the garden’s originally intended design to nurture the garden over the long-term as a designated Cultural Property of Japan. 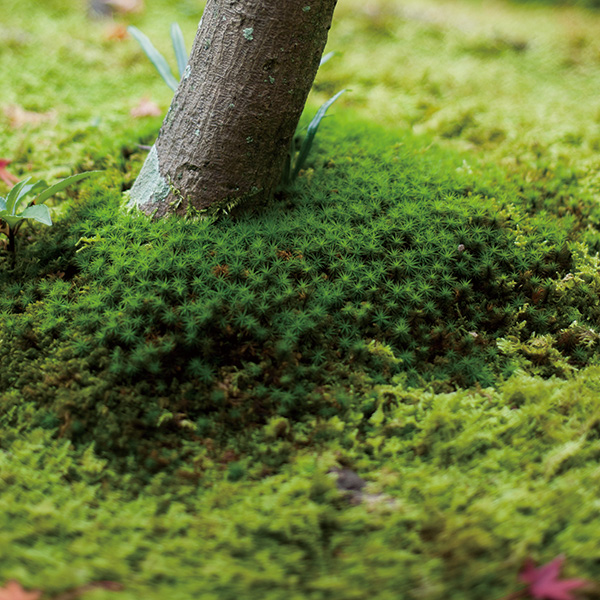 A Garden Woven Together by Time: The Beauty of Moss

“It is dull to rely upon moss, so I am determined to plant grass.”
It has long been said that one of the finest charms of Kyoto’s gardens is the beauty of their moss. Nevertheless, Marquis Yamagata preferred grass. There is something in Murin-an’s bright lawn space that comes close to the natural landscape gardens that we see in England of that time and also in the village mountain landscapes of Japan. Due to the high-humidity environment, however, the moss soon won out after the garden was completed. Over time, Yamagata came to accept the moss’s beauty, saying, “It is also splendid to have flowers whose names I do not even know blooming amid the lush moss.” Today, there are over fifty species of moss that spread over the garden like velvet. A beauty that only time can weave is found here. 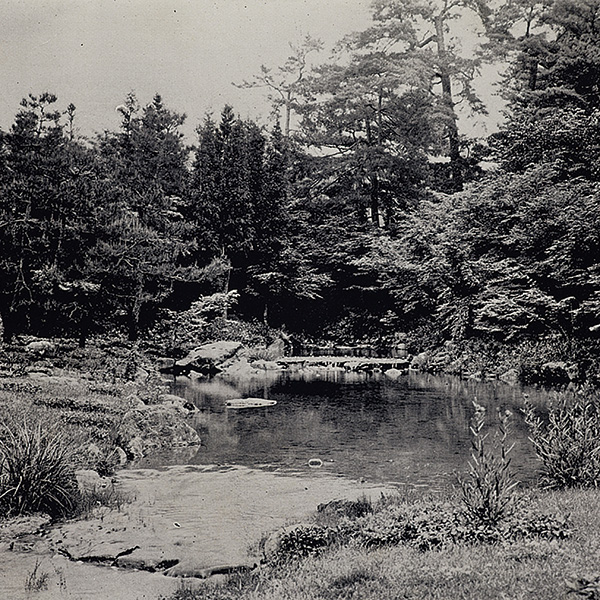 Thirty Fir Trees are Planted in the Garden

Yamagata had an innovative sense not just for grass, but for planted trees too. He ordered fir trees to be planted in his garden despite the fact that, unlike pine trees and plum trees, firs were usually not used as garden trees in Japan. Ogawa Jihei VII was quite surprised by Yamagata’s order, but he had the competence necessary to make sure it became a reality. We can see these young firs in this old photograph. Some of these firs still stand in Murin-an today, where they watch over its garden. 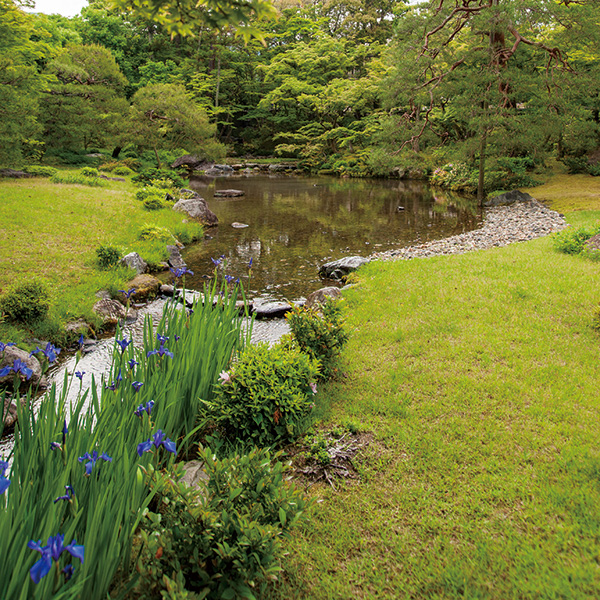 “Most people mainly built ponds, yet I find rivers to be more tasteful.”
That waterflow making the stream ring with a pleasant warble; that’s actually water drawn from the Lake Biwa Canal. The opening of the Lake Biwa Canal was one of the Meiji period’s great public works projects and was intended to rejuvenate Kyoto after its economic decline following the move of Japan’s capital to Tokyo. Yamagata, who as a politician had been involved in the canal’s opening, was the first person to build a villa here and he directly incorporated canal water into it. The irrigation method using the siphon principle to lift the water to the top of the waterfall is still used today. 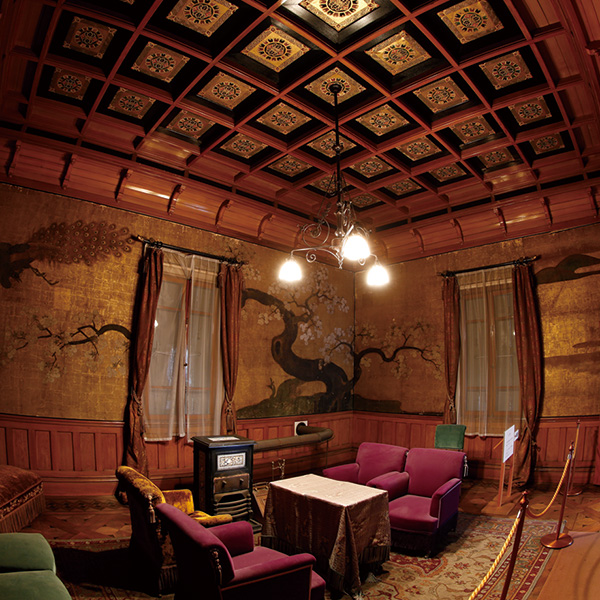 At the Western-style house, get a glimpse of the historic Murin-an Conference

On April 21, 1903, Japan’s leaders held a meeting to decide how to begin Japan’s war against Russia. Present at this conference were the elder statesmen Itō Hirobumi and Yamagata Aritomo, Foreign Minister Komura Jūtarō and Prime Minister Katsura Tarō. This was the “Murin-an Conference,” which is now considered to be an important moment in history that determined Japan’s later diplomacy toward East Asia. In an age where Japanese houses typically had no industrialized heating, Murin-an’s Western-style house was a rare space where the heat could be adjusted. What did Japan’s leaders discuss in this stove-equipped room?

For more detailed information, see the webpages below.

1.Relax with some matcha tea in front of the landscape borrowed from the Higashiyama Mountains

The majestic Higashiyama Mountains are visible from the central hiroma space in the main house. Feel free to relax with some matcha tea as you gaze upon the “borrowed” external landscape that has been incorporated into the garden. Matcha tea is ¥600 yen and comes with Japanese sweets. Our friendly staff also offer free ten-minute tours!

A Japanese garden has places to stand where it seems to shout, “Look at me from here!” These are also the places where a garden creator or gardener demonstrates their abilities. Why not search for these places and find a photo spot of your own? The trick is to look at the garden from the perspective of the guest. From the front of the tokonoma alcove to the large stepping stones, enjoy all the scenes that Yamagata liked to show off to others.

3.Enjoy Japanese culture in the best place possible; the inside of a garden

At Murin-an, we hold events that combine elements such as tea and incense or Japanese sweets and ink paintings to dynamically cut across Japanese culture, which has always been cultivated hand in hand with Japanese gardens. Enjoy a time filled with the richness and pleasure of tasting things. 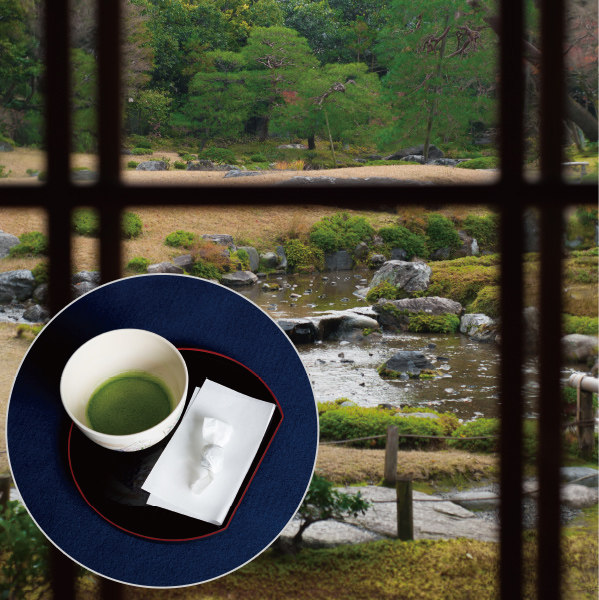 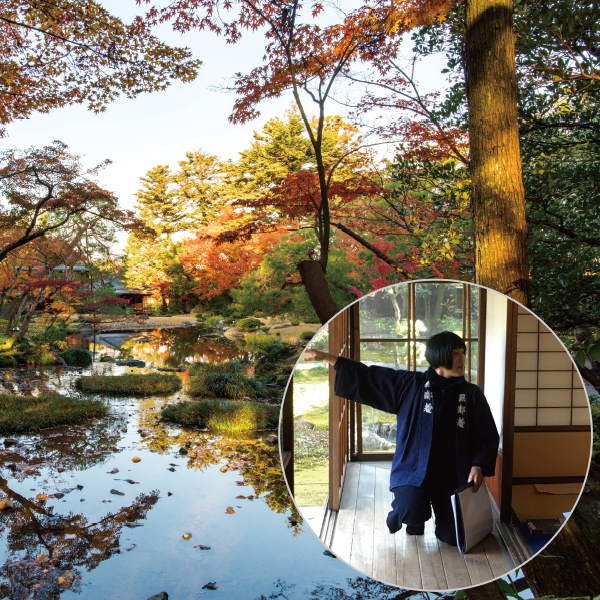 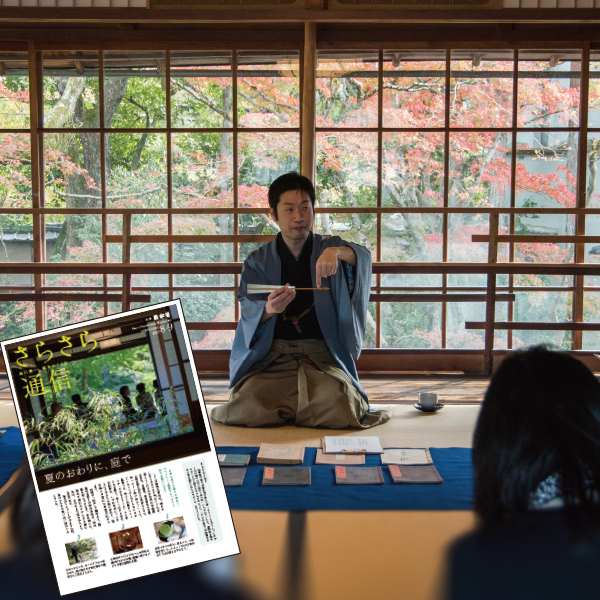 Rules for Walking in the Garden

The garden is meant to be enjoyed not only by using it, but also by viewing it. Follow the rules for walking in the garden and become an astute viewer of a garden of fine taste.

Places where stepping stones have been sunken in are messages to “please try to walk on the stones.” One reason for this is to avoid hurting the moss and the soil. Another reason is to enjoy the feeling of the stepping stones themselves. The size and rhythm of the stones guide people’s line of sight as they walk through the garden. When you come to a stone that suddenly makes you want to stop, look around and enjoy the fabulous scenery that you can see from it.

Walk quietly along the garden pathway so that you do not kick its gravel. Scattered gravel ruins the effect of the beautiful moss. If you take each step carefully and take your time while viewing the scenery, you will naturally find yourself walking quietly. You can tell someone who knows how to appreciate a garden by the way they walk.

The barriers made of bamboo and stone mean “please refrain from proceeding any further.” The areas behind the barriers may be dangerous or in the middle of being repaired. Knowing this will allow you to enjoy the garden with peace of mind. Next time, let a friend know too. 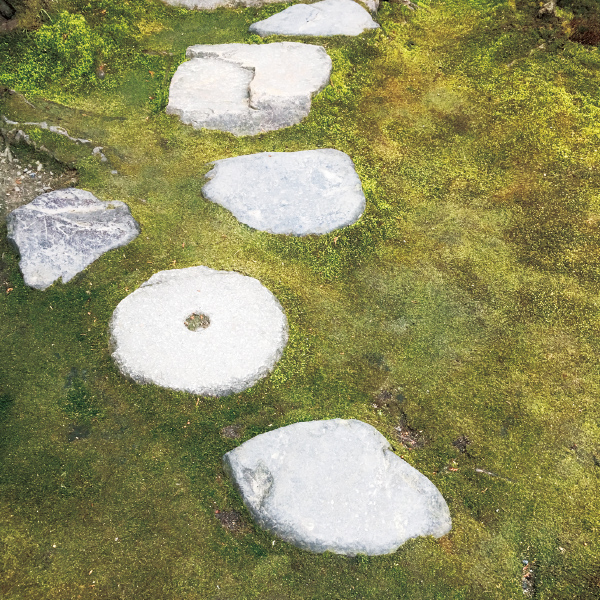 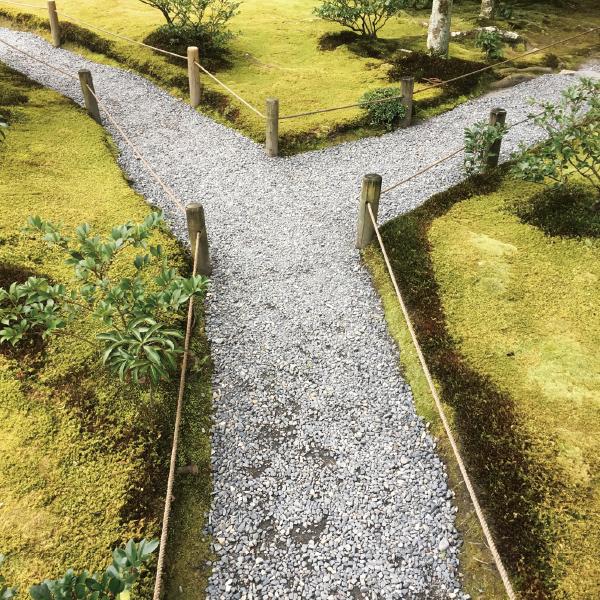 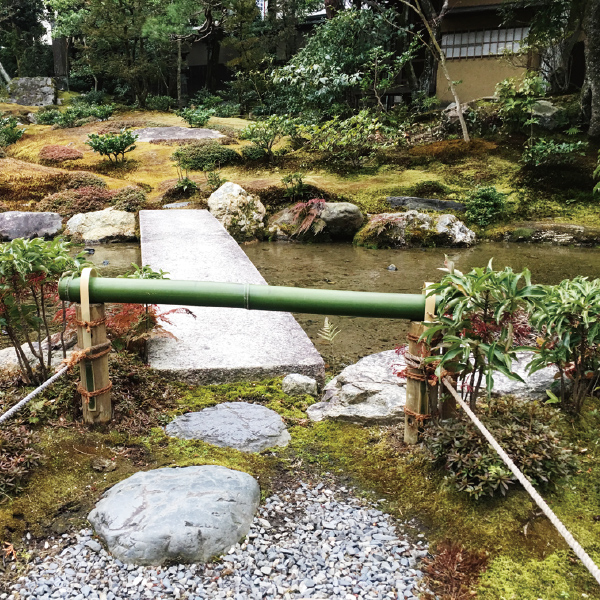 What is a Scenic Place of Beauty？

Scenic Places of Beauty are protected by the Cultural Property Protection Act and therefore, like the paintings or sculptures in a museum, cannot be arbitrarily altered. As public property, they must be carefully nurtured by the national government, experts and the public.
Murin-an is designated as a Scenic Place of Beauty for the following reasons.
Its water is always shallow so that it flows beautifully with a full ripple, and it has two or three places that water falls down from. Together with the broad surface of the water, the lawn helps produce a bright modern garden landscape. The peaks of the Higashiyama Mountains above the forest act as borrowed scenery. It is an excellent garden of the Meiji period.” (excerpted from the Committee for the Protection of Cultural Properties, Bulletin No. 19, 1951).

At Murin-an, we manage the garden and facilities based upon these reasons given for designating it a Place of Scenic Beauty.

The Okazaki Area: Home to Murin-an and the Nanzen-ji Temple Neighborhood

In 2015, Kyoto’s Okazaki Area was designated a national Important Cultural Landscape, entitled “The Cultural Landscape of Okazaki in Kyoto.” Near the end of the Edo Period, Kyoto was a center of political activity and the Okazaki area was lined with villas belonging to various feudal domains and clans. The Okazaki area’s original landscape used to be rice paddy fields before it drastically changed to a district inhabited by the politically powerful. After the Meiji Restoration, however, these villa residences that had been maintained by feudal lords (daimyō) in Edo, had served their purpose and were taken out. Hence, the Okazaki area once more became a landscape of rice paddies. The now emperor-less Kyoto started down a path of decline once the capital of Japan was moved to Tokyo. In order to revitalize the declining city, Governor Kunimichi Kitagaki suggested the Lake Biwa Canal project to provide waterworks and hydro-electric generation of power. Thus, the Okazaki area was developed once more. Because Meiji government policy nationalized 80% of the Nanzen-ji Temple grounds, ambitious plans were made to build a giant industrial zone using hydropower drawn to this area from the canal. With the introduction of hydroelectric power technology from abroad, however, it became possible to supply electricity to distant places, and thus movement began to take place toward preserving this area’s scenic beauty by building villa estates instead. This was the beginning of the villas of the Nanzen-ji Temple area, from which there are many famous modern Japanese gardens, including Murin-an, that still remain today.
In 1895, Okazaki hosted the Fourth National Industrial Exposition, which encouraged the development and promotion of national trade. Thereafter, Kyoto Municipal Zoo was built in 1903, the Kyoto Prefectural Library in 1909, and the Kyoto Municipal Museum of Art in 1928. These foundations allowed Kyoto to develop into the tourism and cultural affairs city that it is today. The Okazaki area is a place whose scenery still allows you today to recall Kyoto’s major turning point at the beginning of the twentieth century.