Yamagata Aritomo, Murin-an’s original owner, has left us the following words:
“To rely on moss is dull, so I am determined to plant grass”

Duke Yamagata did not care for moss. Instead he created the bright lawn space that is a characteristic feature of Murin-an’s garden. Research holds that when Murin-an was first completed, only the perimeter around the teahouse was moss. Kyoto has a high level of humidity throughout the year, a climate that moss enjoys. Gradually, moss began to grow inside Murin-an’s garden too. Whereupon Yamagata, instead of disdaining the moss, amenably accepted it as a natural change. (“It is also splendid having wildflowers I do not even know blooming amid the lush moss.”) There are at least around fifty species of moss that we know of that have been confirmed growing naturally at Murin-an. (Text: Miyako Hamasaka) 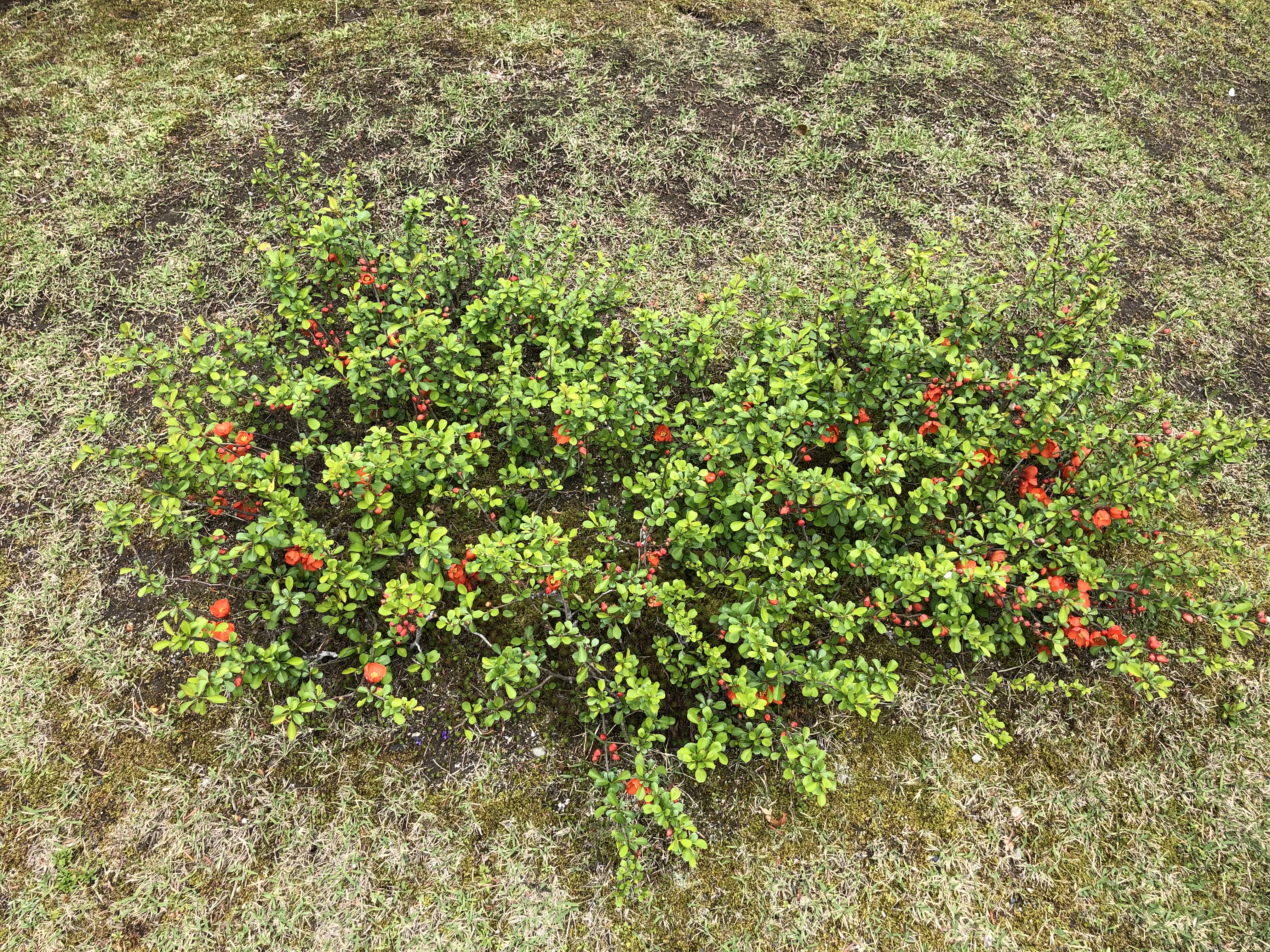 This is Miyako Hamasaka, Planning Officer at Murin-an.
In this seasonal “Garden Care Diary,” I share how we foster a garden that is a registered Place of Scenic Beauty by focusing on the monthly garden care that we perform.

☆A world that unfolds before your feet☆

Today’s garden care consists of picking up fallen leaves from evergreens shedding for spring and tending to moss that has spread so far across the maple grove that it has gotten into the garden path. We perform our work under the direction of Murin-an’s head gardener, Kenta Deguchi.

7:00 AM
First, we prepare to welcome our visitors. Work begins with the area around the main house’s front entrance area, where there appears to be more fallen leaves than there were in February. By the front entrance is a Kurogane holly. We’ll remove these fallen leaves with a whisk broom (teboki). 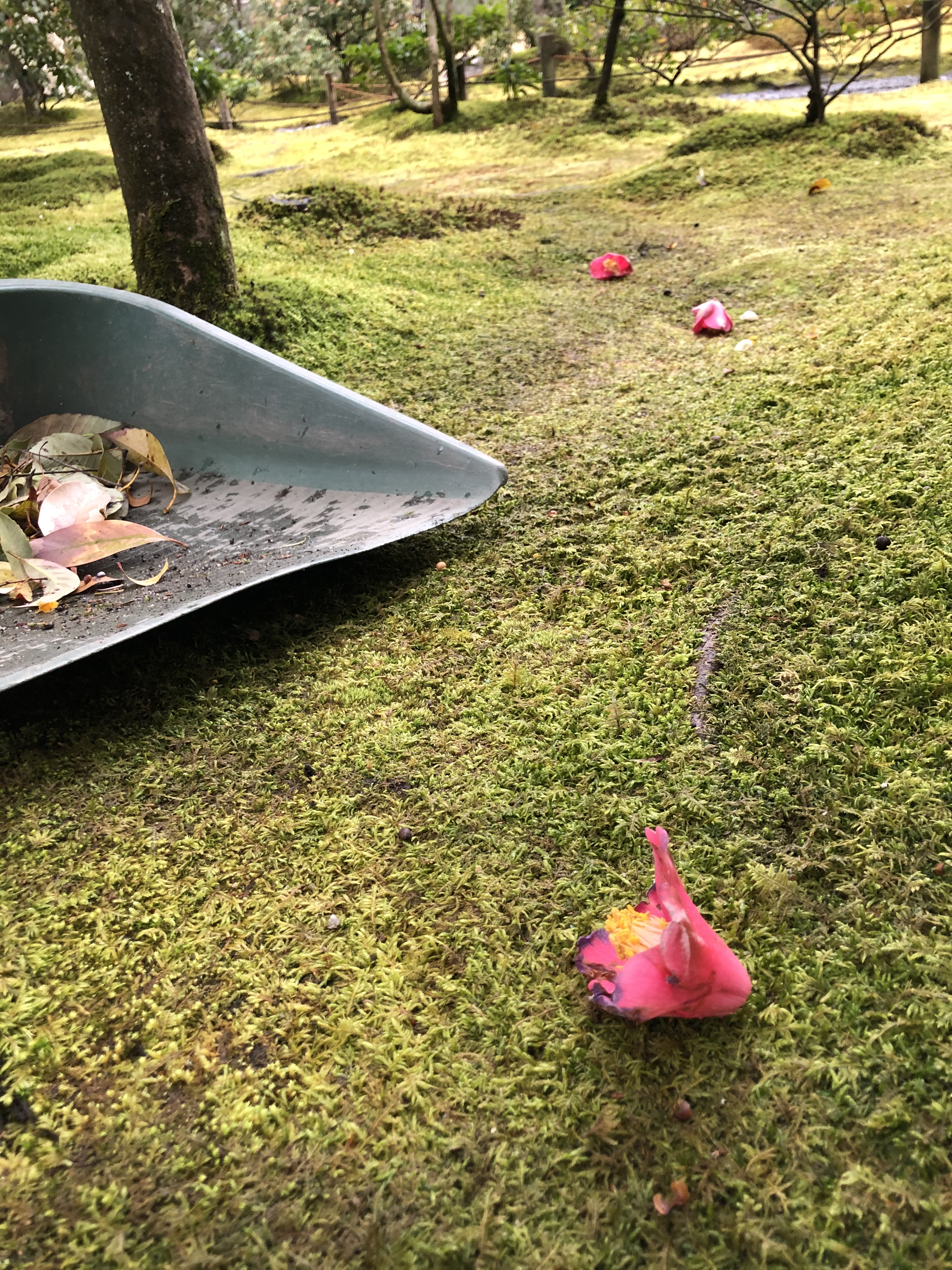 8:00 AM
Garden work in the morning consists of picking up fallen leaves around the cast-iron plants that are spread out in front of Murin-an’s Western-style building.

While we pick up fallen leaves, we also remove maple seedlings. 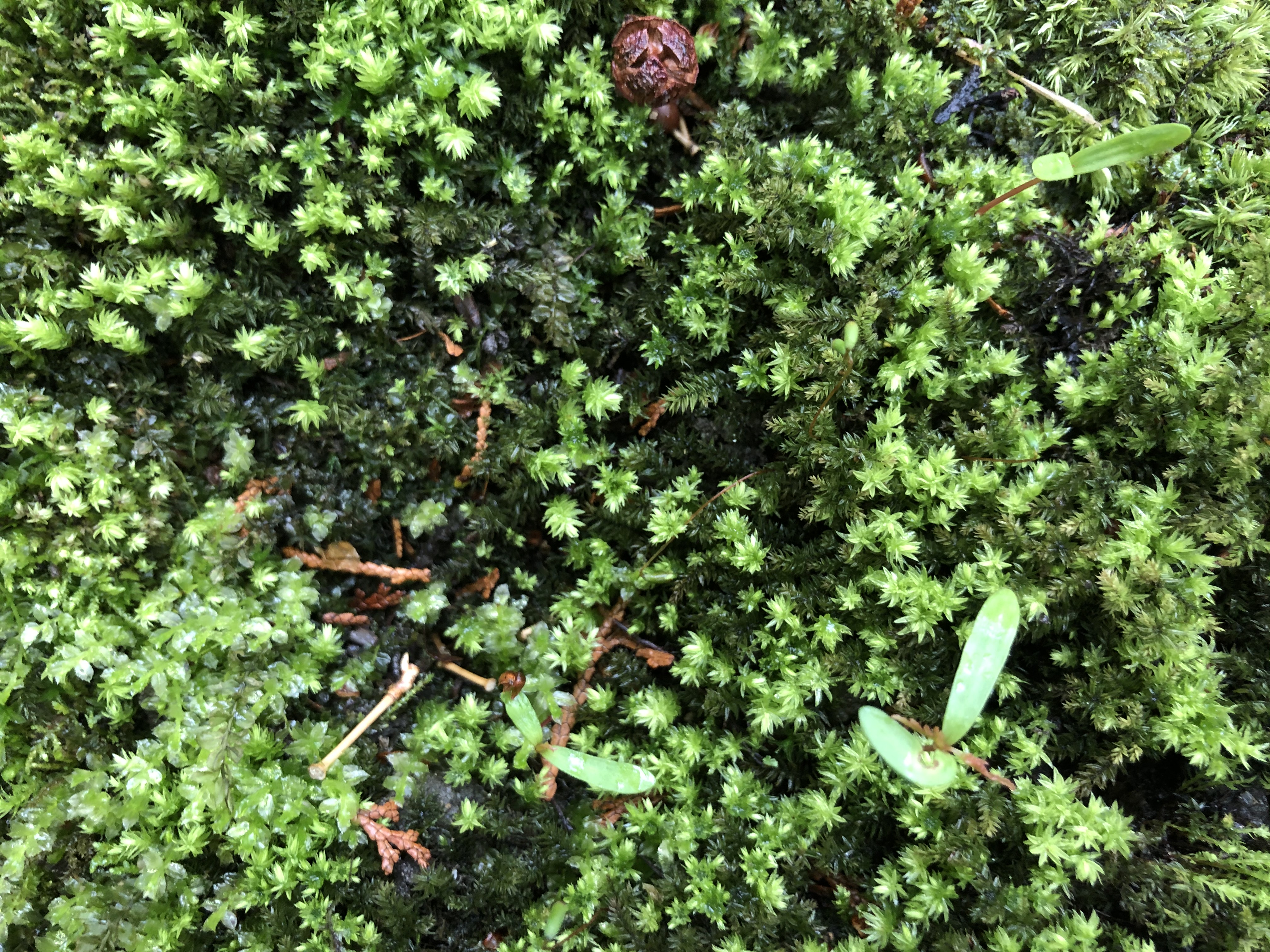 Here and there, maples seedlings have fallen down. 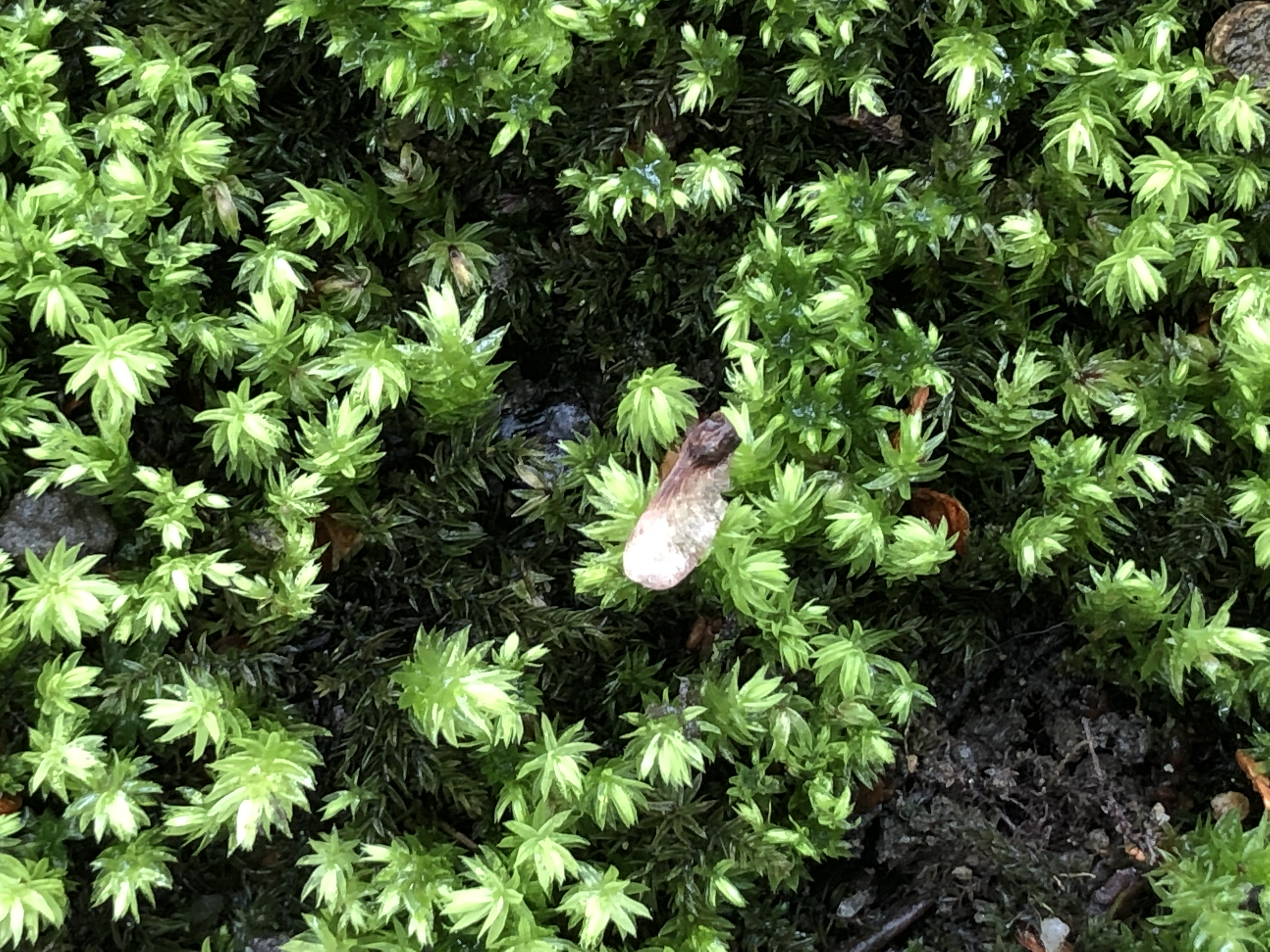 A flower discovered by the foot of a cast-iron plant stalk. 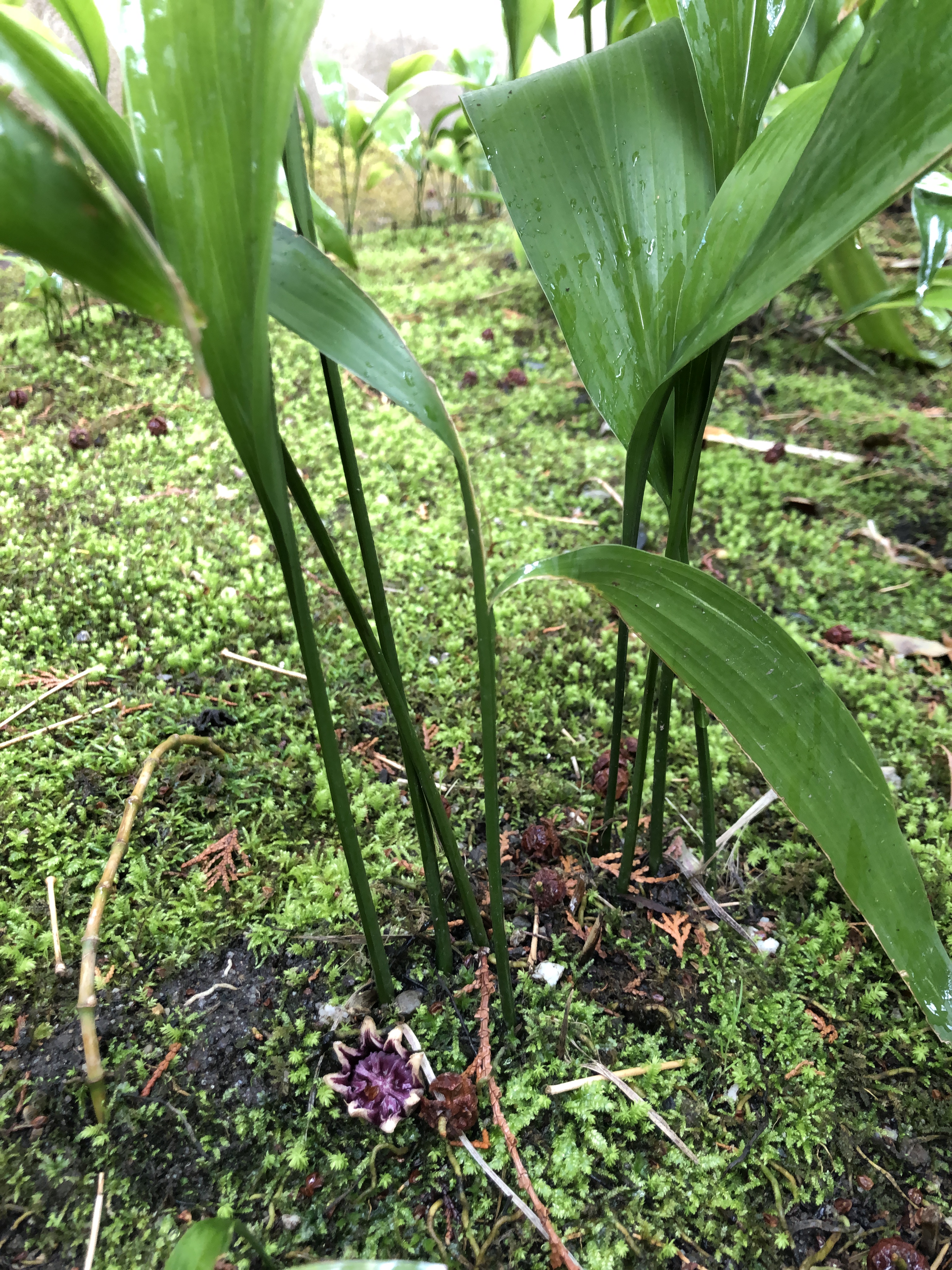 March-May is the flowering season. 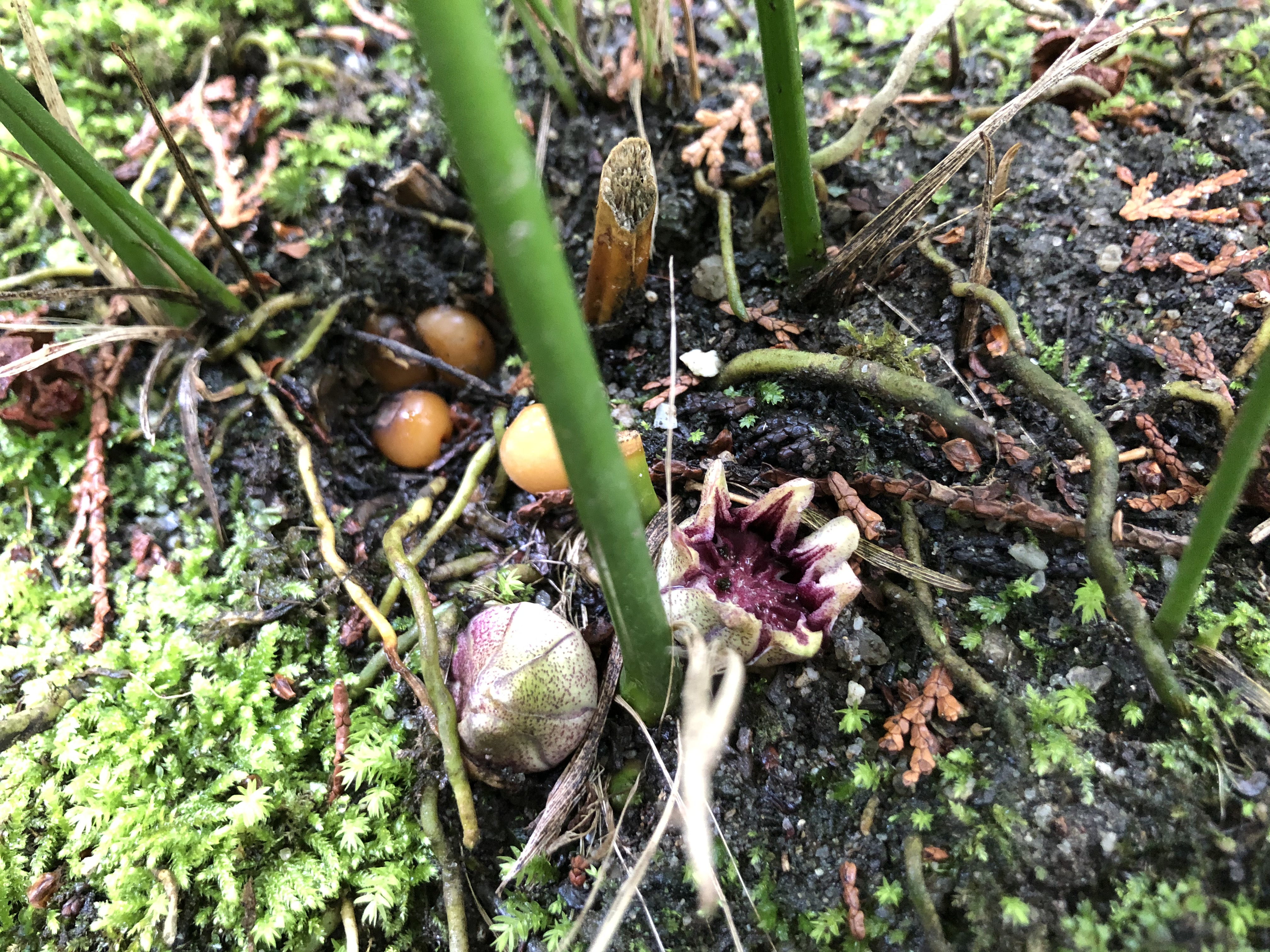 We found Antrodiella zonata (polyporaceae family). It seems to have wandered astray into the forest. 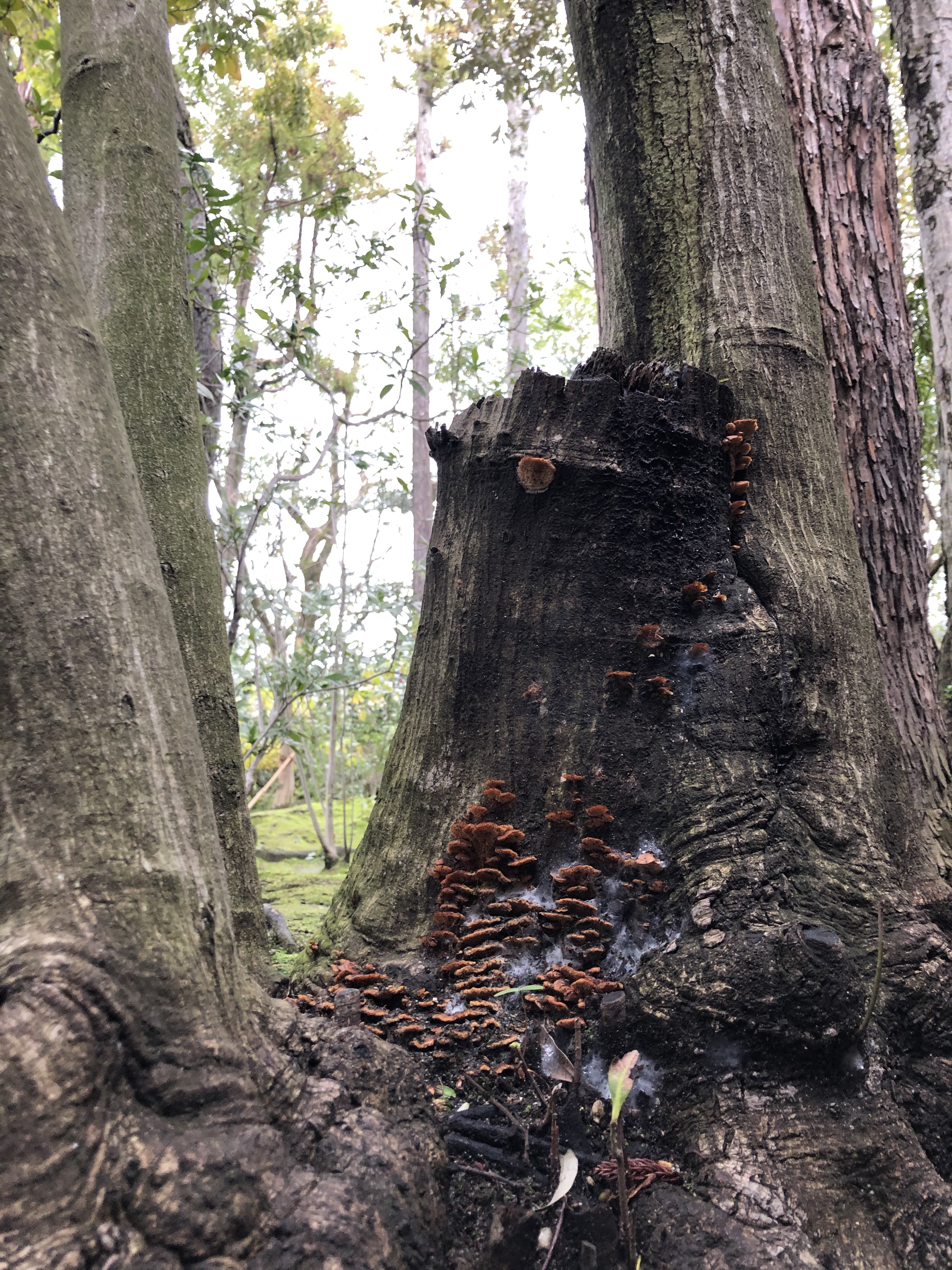 Mushroom discovery! These are removed without a trace. 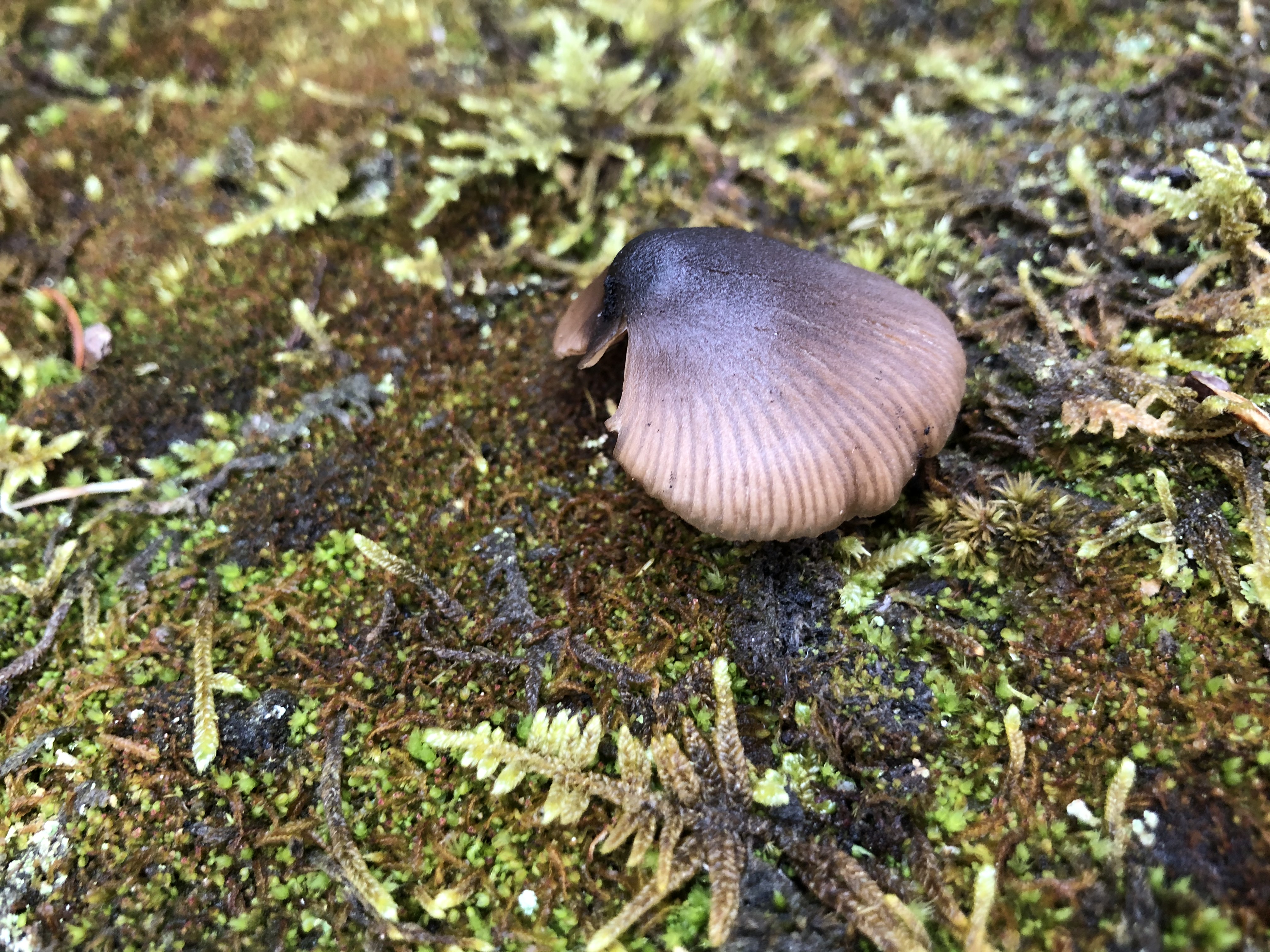 Here are the results from the morning’s work. 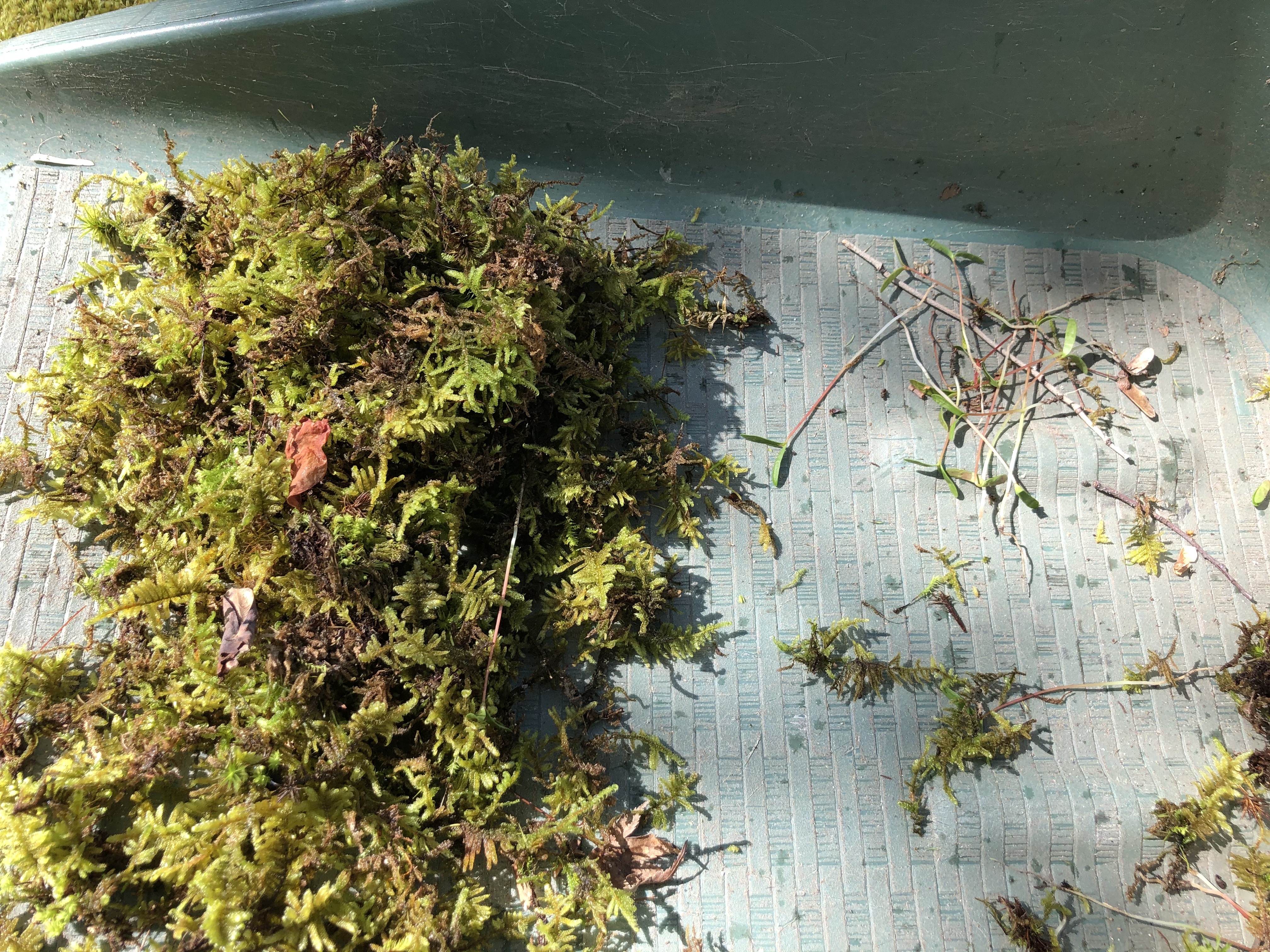 1:00 PM
After a lunch break, in the afternoon we start the much-anticipated work on the moss. Murin-an’s naturally formed moss forest grows by responding straightforwardly to climate changes. Even when moss is contiguously joined to other mosses, it will differ according to its sunlight exposure; or, that is to say, it will be “optimal” for its spot. We care for the moss as we imagine how it will change—and how we hope it will change—after several days, months, and years. To do this, we need the advice of Murin-an’s head gardener. 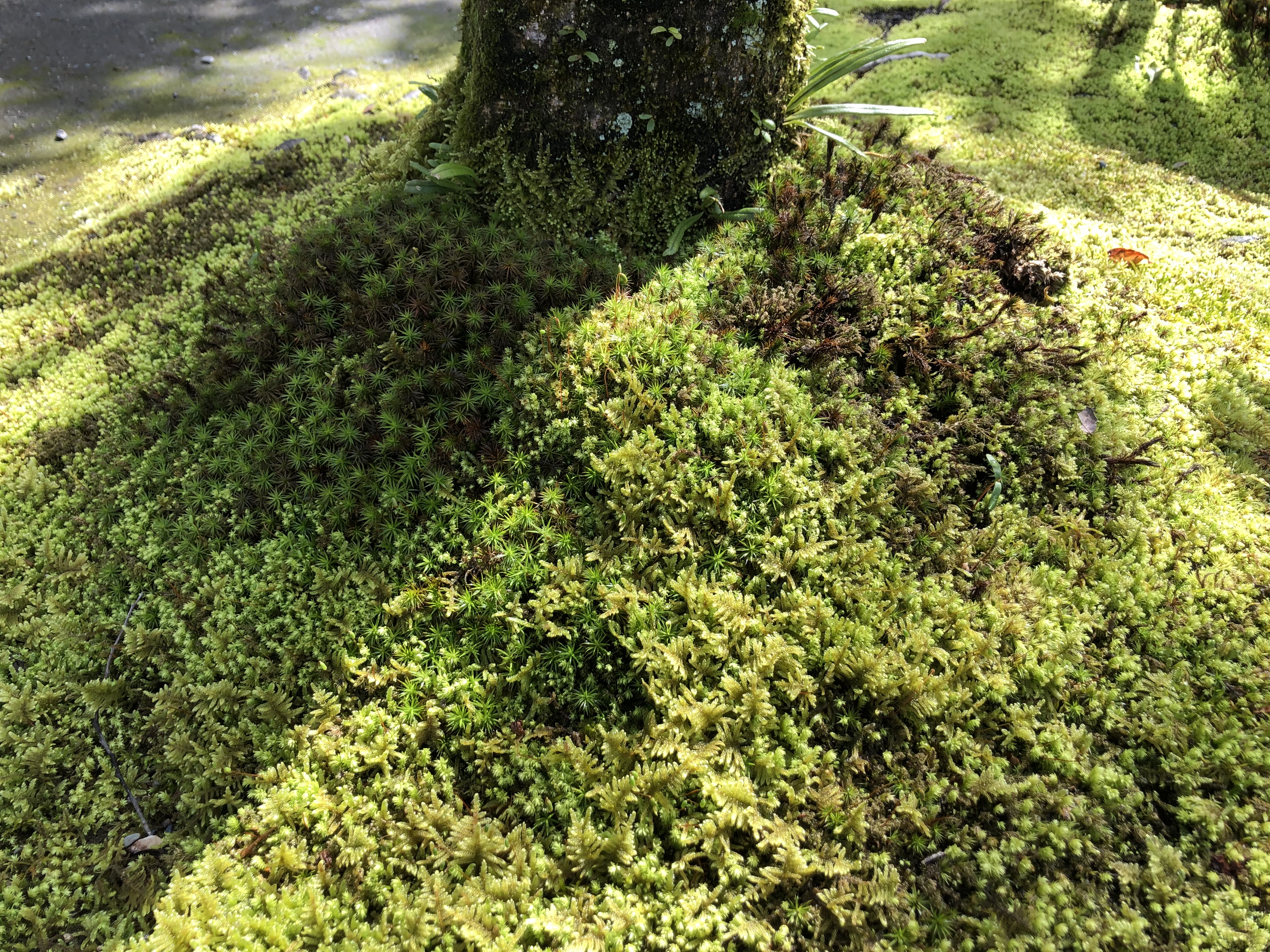 Before weeding out the carpet moss. 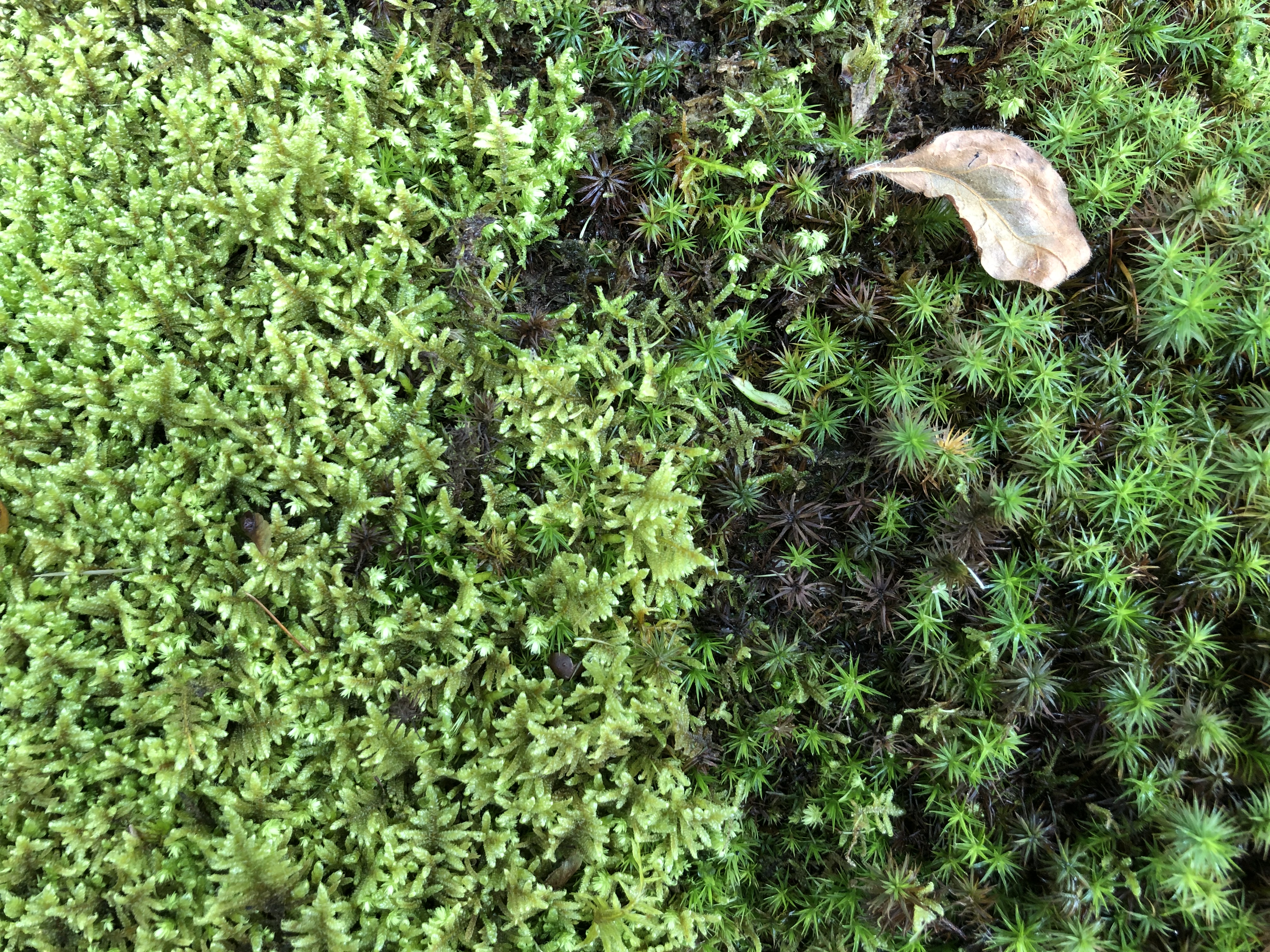 After removing the carpet moss, the haircap moss appears. 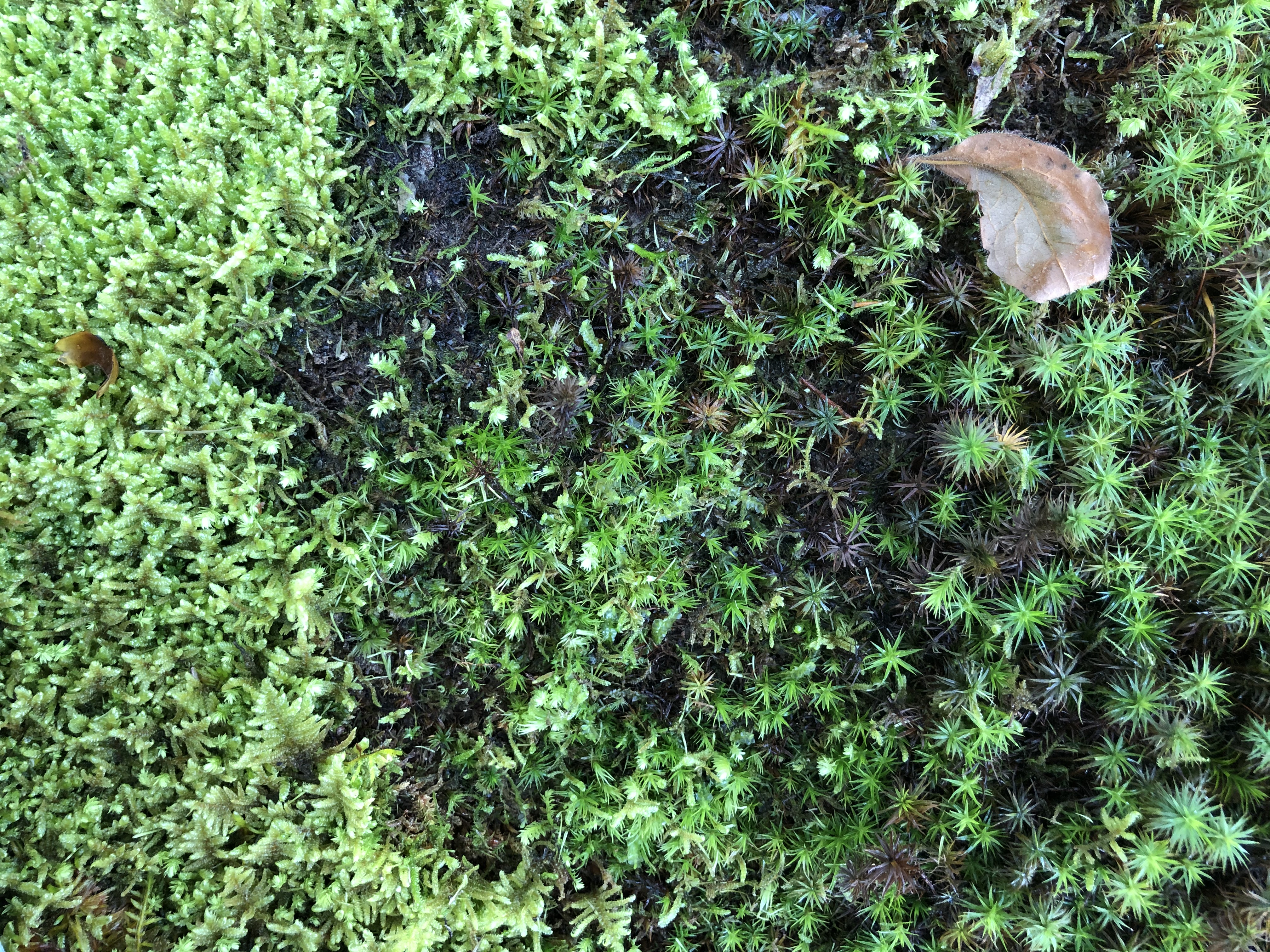 “I could tell right away whose work this was,” says one of Murin-an’s staff members.

Next time, if I have the chance to care for the moss, I’ll pay more attention to the finished look. 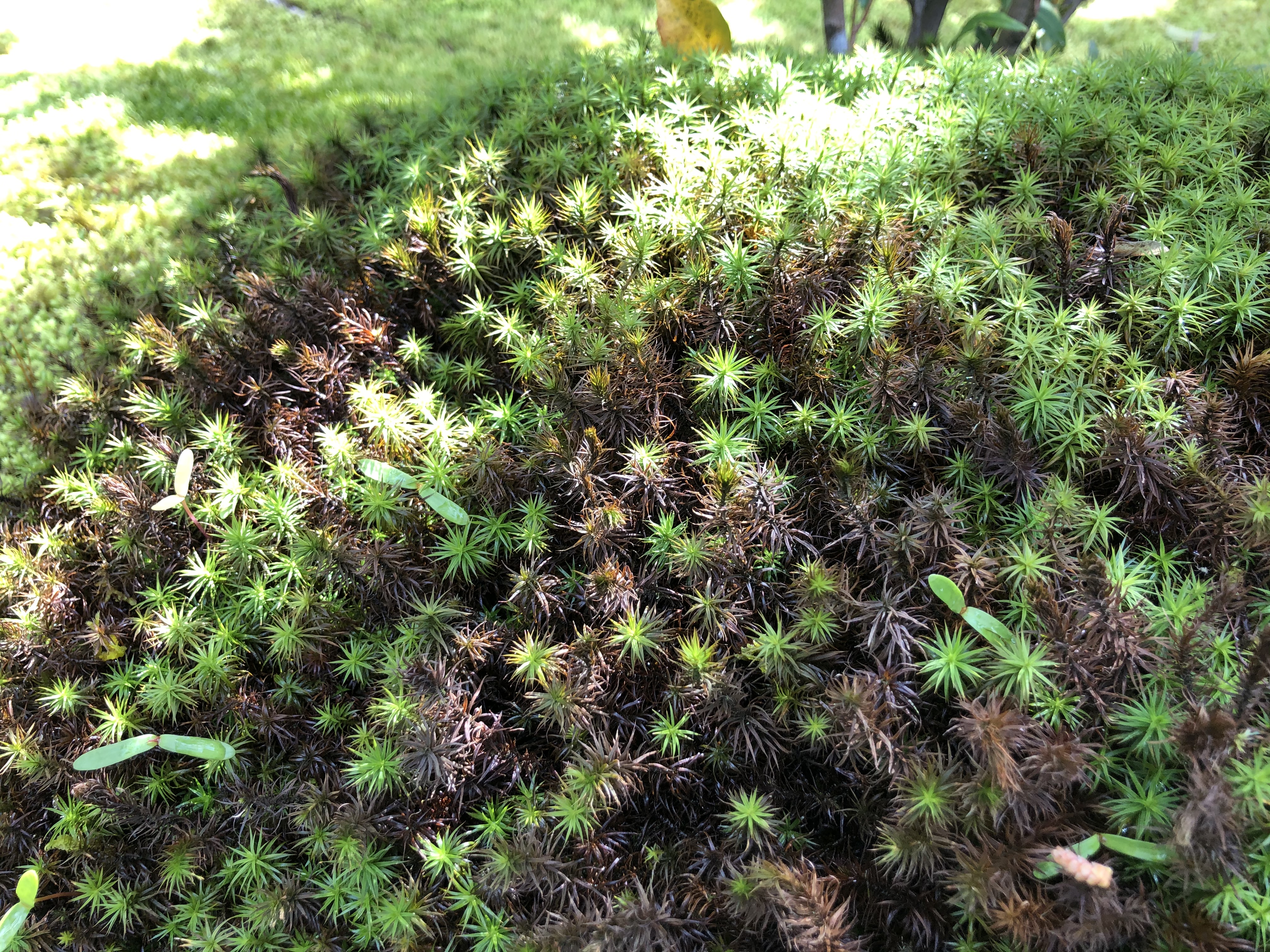 After removing the maple seedlings. 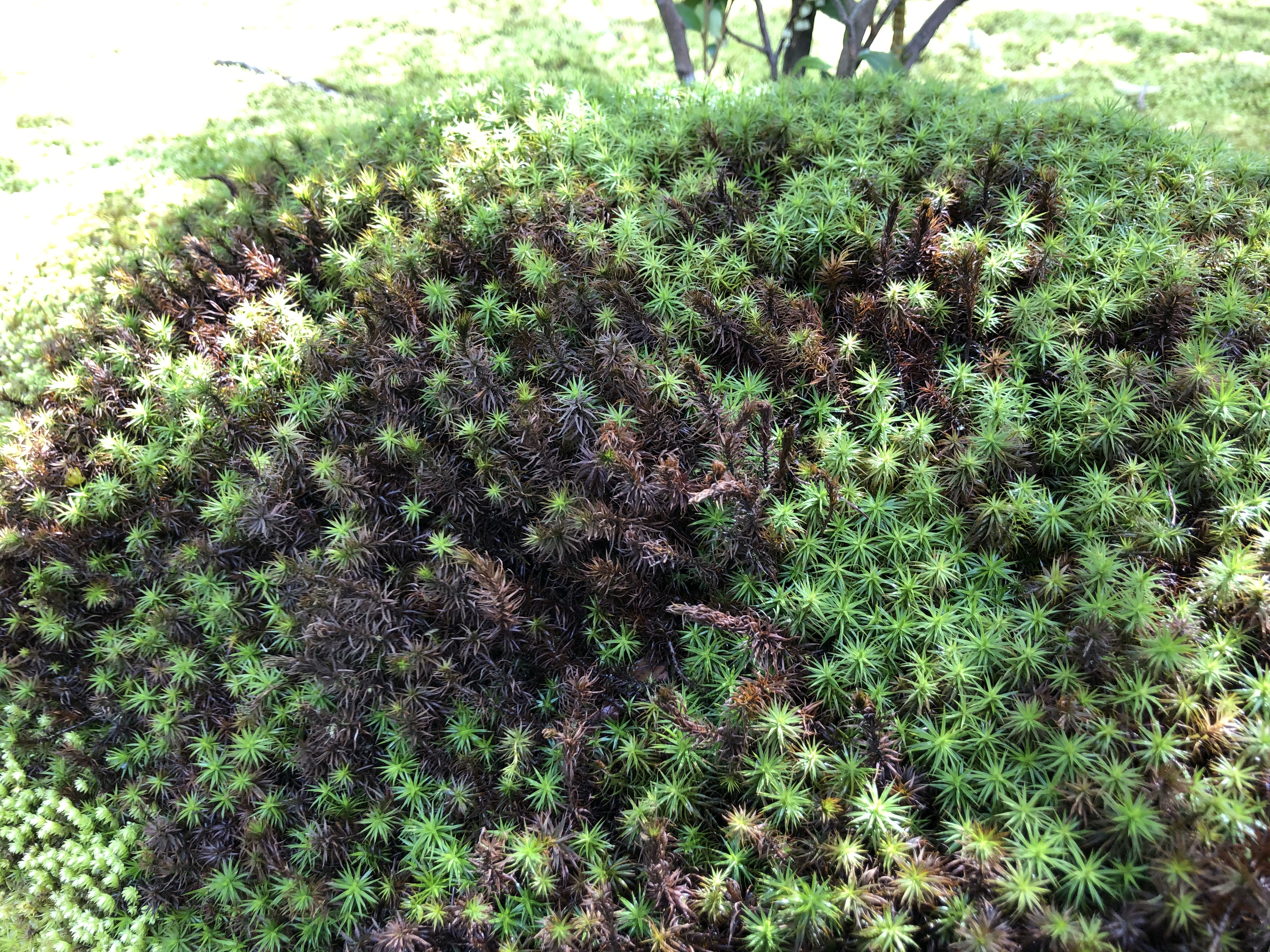 Spring during March-May is the best season to enjoy the garden lying right before your feet.
Please come to Murin-an to see it for yourself! 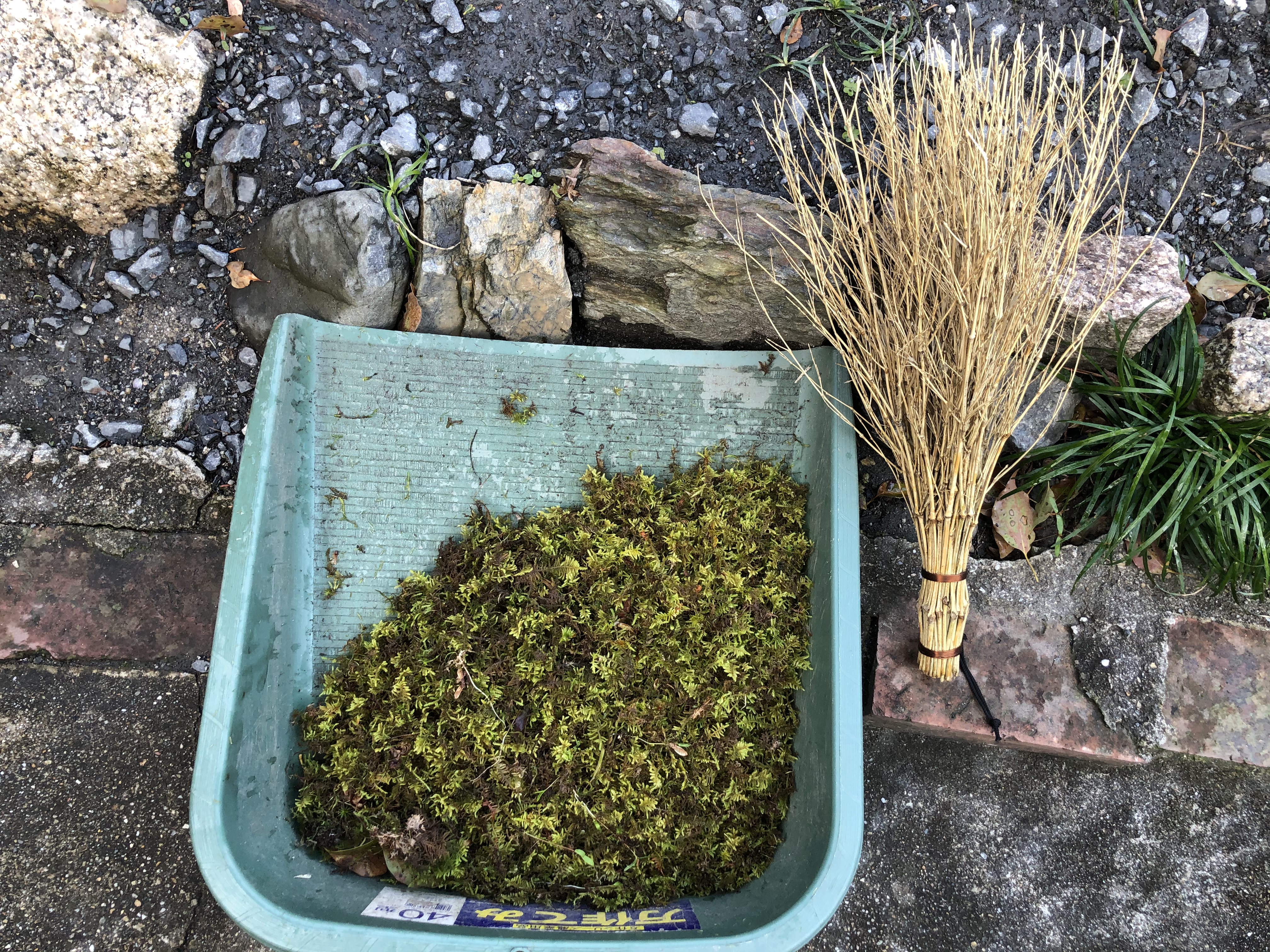 Look for my Garden Care Diary next time!

＊＊＊
Bonus. We found some large Japanese cedar buds. They were releasing some fine pollen into the air. 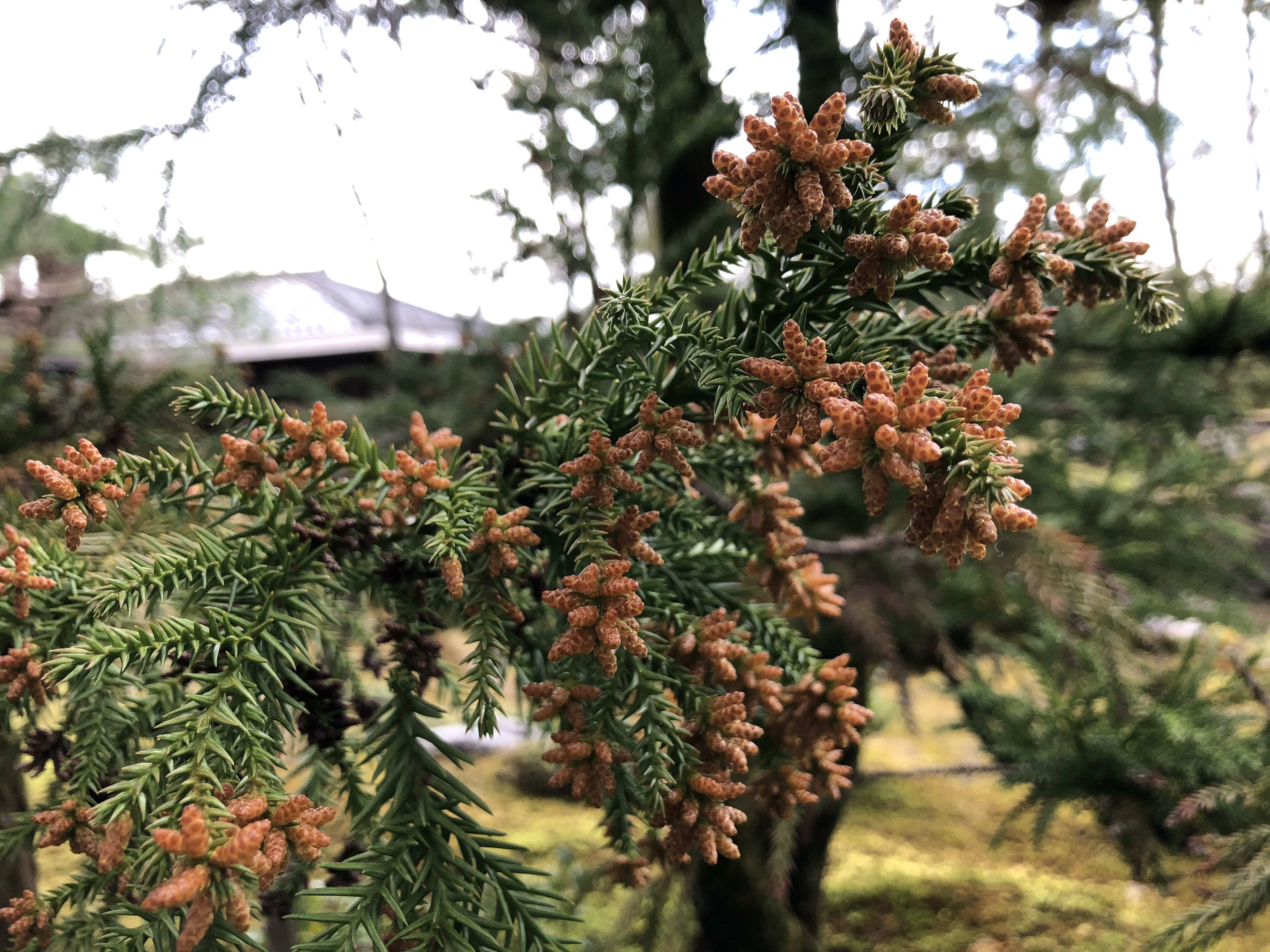 Crouching and kneeling forward puts a heavy strain on one’s waist and arms, and maintaining these postures is monumentally difficult. As I continue this garden care training, if the day comes that I no longer have muscle pain the next day, I suppose I will have come close to achieving the model for how this work is done (see photograph below). 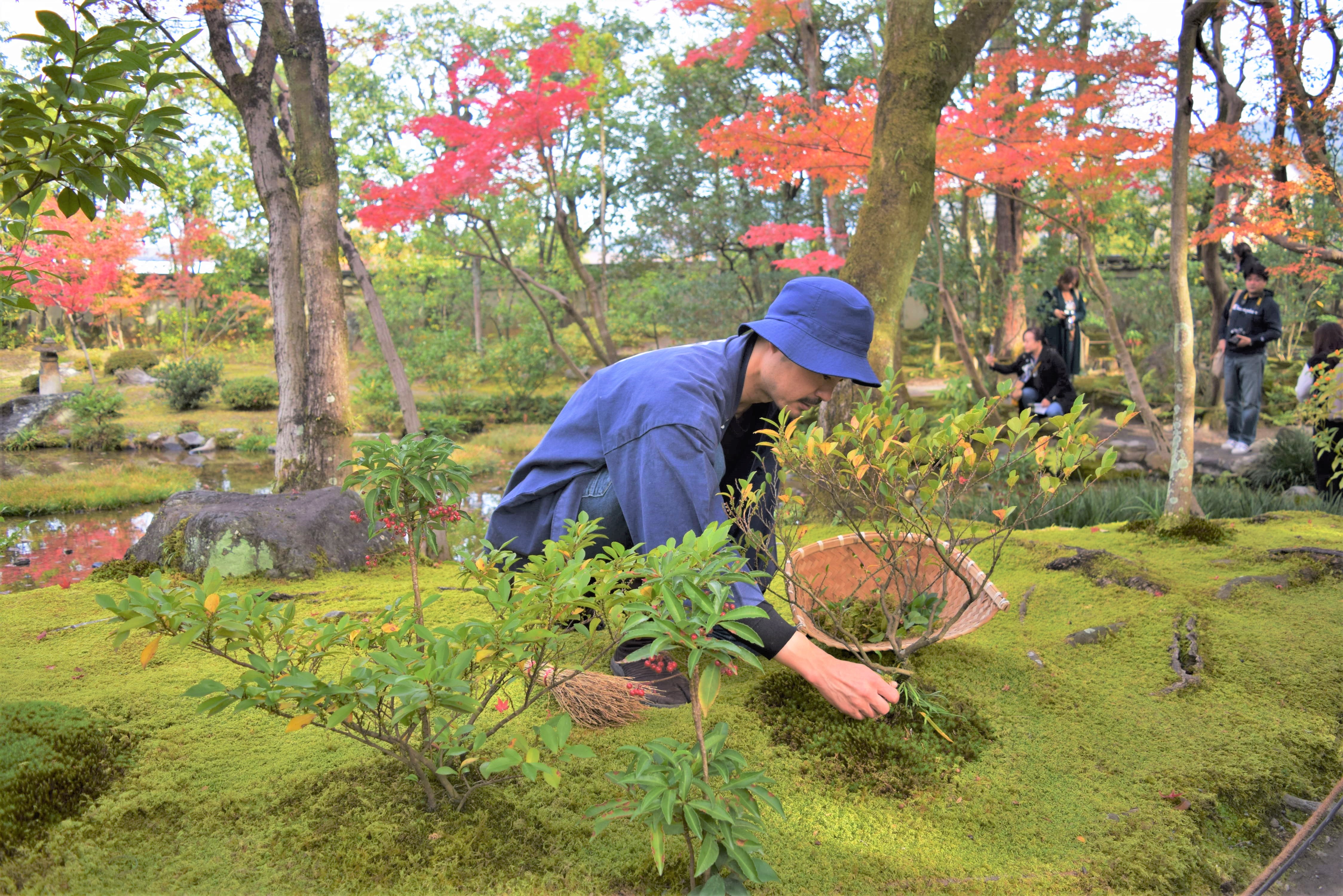 How the work is done