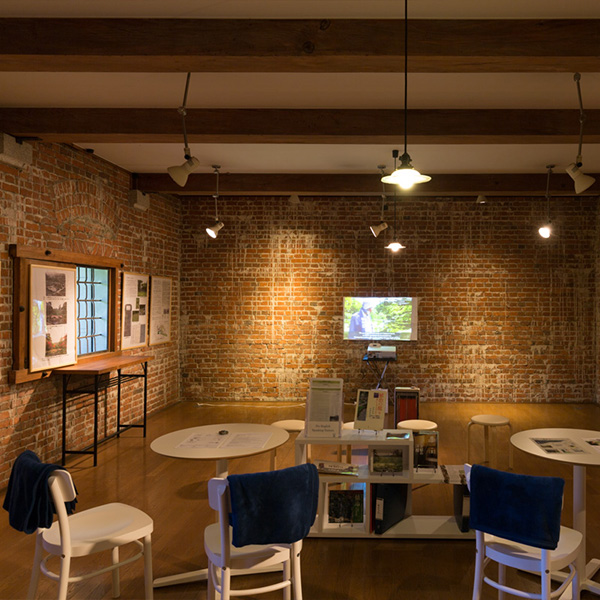 Murin-an’s Western-style building features a panel exhibit introducing the aesthetic consciousness of Yamagata Aritomo, Murin-an’s owner at the time of its creation, and the profound feeling he had for gardens. There is also a video playing that explains our efforts to foster Murin-an’s garden. Please have a look around whenever you visit.

Murin-an is a nationally designated Place of Scenic Beauty owned by Kyoto City. Starting in 2007, Kyoto City introduced a bidding proposal system that went beyond simply requiring the satisfaction of technical specifications by selecting the best managers from among the groups submitting the best proposals to delegate management responsibility to.
Through this system, Ueyakato Landscape Co., Ltd. has continuously proposed and implemented methods of fostering Murin-an’s garden to draw out its most attractive qualities even further. The foundation of the philosophy behind these proposals is what we call “the pursuit of Murin-an’s essential value.” This philosophy means investigating what the original vision of garden owner Yamagata Aritomo was at the time of Murin-an’s creation during the Meiji period (1868-1912) and drawing upon that vision to “foster a living garden” that considers contemporary climate change as well as changes that have occurred in our own sensibilities.

This exhibit is broadly divided into displays on the 1st and 2nd floors.

1st floor exhibitThe 1st floor exhibit introduces our research in pursuit of understanding Murin-an Garden’s “essential value” and actual methods used by the horticultural craftsmen who care for this garden.

2nd floor exhibitThis is the site of the Murin-an Conference, where Japan’s leadership met in 1903 to decide its foreign policy toward Russia. We have prepared a space here that allows you to experience the daily life that Murin-an’s owner Yamagata Aritomo once led here. We hope this exhibit will help deepen your appreciation of Murin-an. 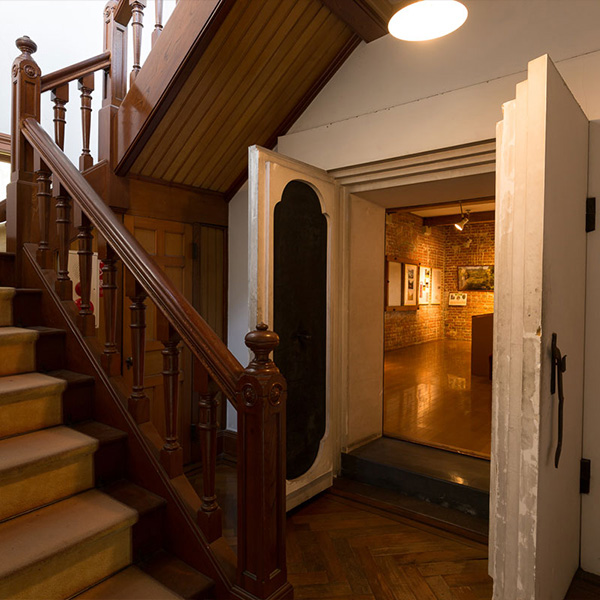 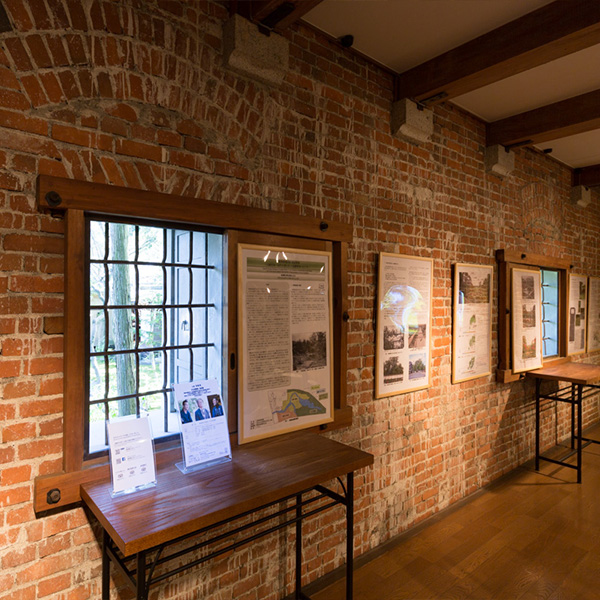 — The Fostering Method of Garden Care

When Murin-an garden was first created, it quickly became famous for its bright spacious lawn centering on the Higashiyama Mountains and its rhythmic stream incorporating water from the Lake Biwa Canal. In his Record of Pleasant Scenes Around the Capital (1907), the journalist Kuroda Tengai even went so far as to praise Murin-an by saying that since its creation virtually all other gardens had emulated it. Over the course of one hundred years, however, the original intent behind the garden became confused and the Higashiyama Mountains were obscured by the thickly growing trees in the background.

First, we referred to historical photographs and documents to get a sense of what Yamagata was most aesthetically attuned to. From there, we set about identifying what the garden looked like when it was first created. In this exhibit, we share that process and the path leading to the garden we see today, while also displaying some invaluable photographic materials.
Enjoy seeing how a Murin-an Garden refocused on the Higashiyama Mountains as its center point was vividly brought back to life. 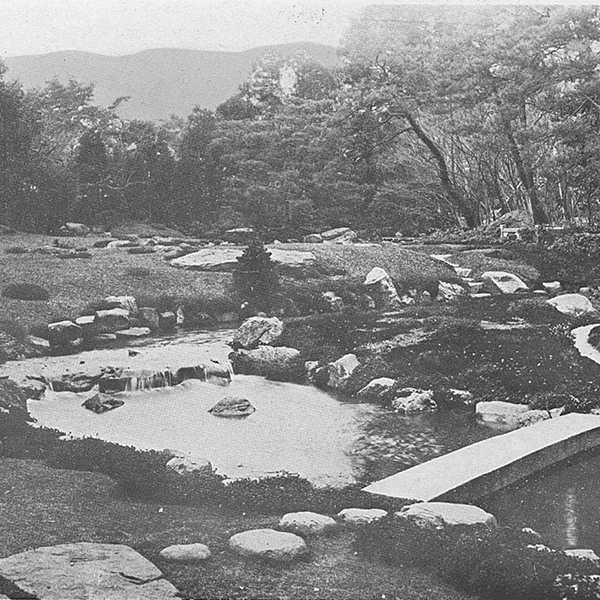 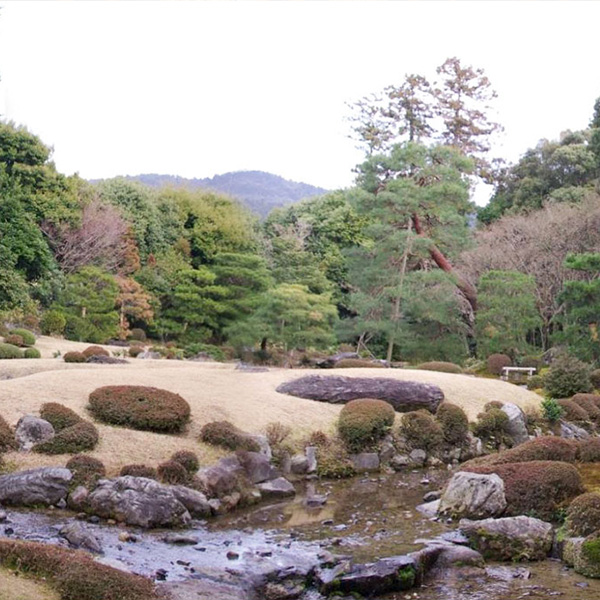 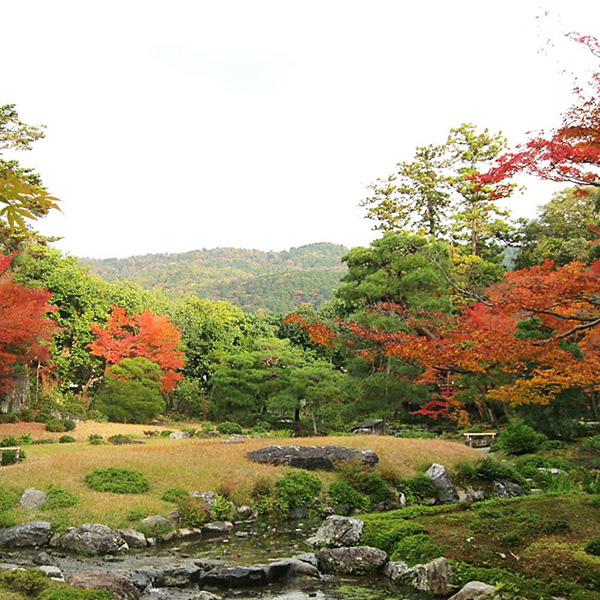 “At the end of spring, the mountain scenery is all the more beautiful. In summer…”
The monument commemorating the Japanese emperor’s gift of two pine trees to Murin-an still remains in its garden today and features poems that inscribe Yamagata’s vision for his garden in stone.

The words on this monument not only make up the foundation of our fostering efforts for this garden, they also help foster our own aesthetic appreciation of it.
At Murin-an garden, Yamagata Aritomo and Ogawa Jihei fundamentally questioned what might be called the classic elements of Japanese gardens—elements such as ponds and moss—and replaced them with the new motifs of flowing streams and lawns.

This shift also reflects the transition occurring in the Japanese people’s aesthetic appreciation of nature during the Meiji period (1868-1912). Try appreciating the meaning of these poems in each of the four seasons at Murin-an. 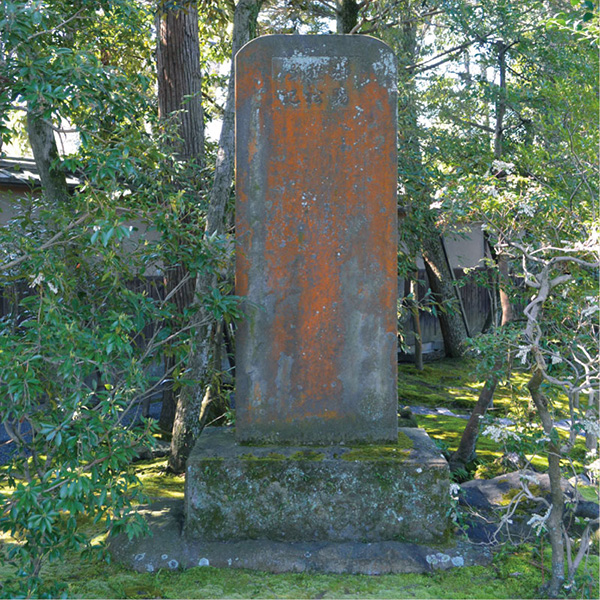 In maintenance management for Japanese gardens, naturally growing flowers are often seen as “wild weeds” to be removed, but in our fostering management for Murin-an’s garden, we carry on the wishes of Murin-an’s owner Yamagata Aritomo by nurturing vividly flourishing “wildflowers.” Today, we have identified roughly fifty wildflower varieties growing in the garden, which we care for by surveying which species to leave in place and which to decrease and by deciding upon proper fostering methods for each of them. For example, the work of picking buds to adjust the number of flowers that bloom in the upcoming year requires an extraordinary amount of concentration to identify new buds still under 3cm in height. This exhibit introduces this work process to you.

Today and every day, the year-round fostering management we perform for these wildflowers is carried out once again. 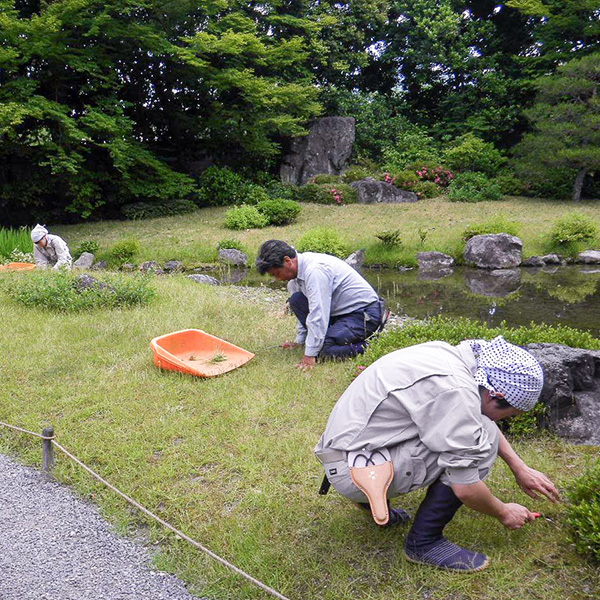 4. Conversing with the Water

—The Water System and Villas of the Higashiyama Area

There is a unique story behind the water that flows through Murin-an’s garden.
In 1890, the Lake Biwa Canal opened in the Okazaki/Nanzen-ji Temple neighborhood where Murin-an is located. At that time, the people of Kyoto hoped that the Lake Biwa Canal would revitalize the ancient capital after the departure of Japan’s emperor for Tokyo. They even lit a fire on Mt. Daimonji-yama when the canal opened to pray for its success. The opening of the canal was originally planned to create water mills whose power could be used to make the Okazaki area into an industrial zone. After Kyoto decided upon the introduction of hydroelectric power, however, it was no longer necessary to concentrate all factory plants in one area. Kyoto thus decided on a policy of preserving the Okazaki/Nanzen-ji Temple neighborhood as a scenic area. This led to the area mainly being used by business figures as vacation villas. Murin-an’s garden is the first and most representative example of a garden that incorporates water from the Lake Biwa Canal. Other gardens you visit in Kyoto just might be connected to Murin-an through this same Lake Biwa Canal. Knowing about the flow of this canal will be sure to change how you look at Kyoto.

Listen closely to the voice of the past

— A room that recreates the Murin-an Conference

On April 21, 1903, as tensions flared between Japan and imperial Russia, the Murin-an Conference was held here on the second floor of Murin-an’s Western-style building. In attendance were Yamagata Aritomo, Itō Hirobumi, Katsura Tarō and Komura Jutarō. This conference became an extremely important meeting that is historically considered to have determined Japan’s later diplomatic policy toward East Asia. The second floor of the Western-style building has been preserved to maintain its appearance on that day. What was on the minds of Japan’s leaders as they assembled in this room? Turning your thoughts to this question could be a good way to break away for a little while from the hustle and bustle of contemporary life. 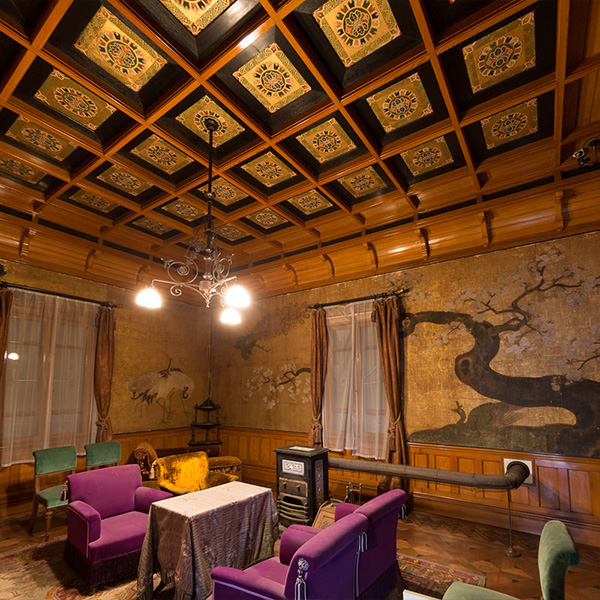 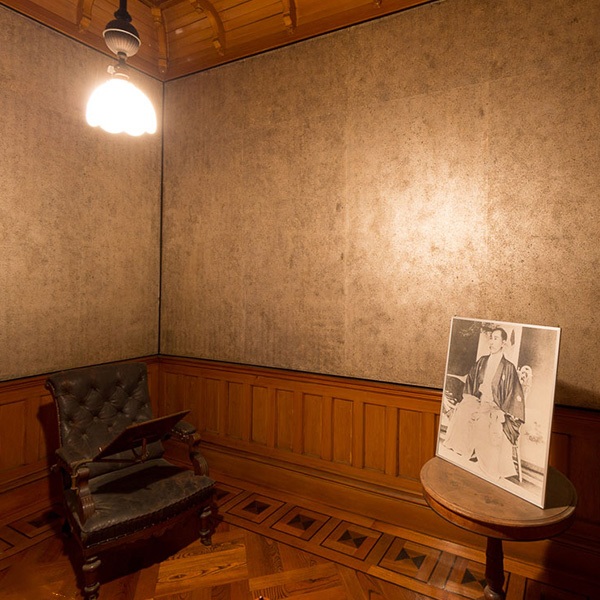